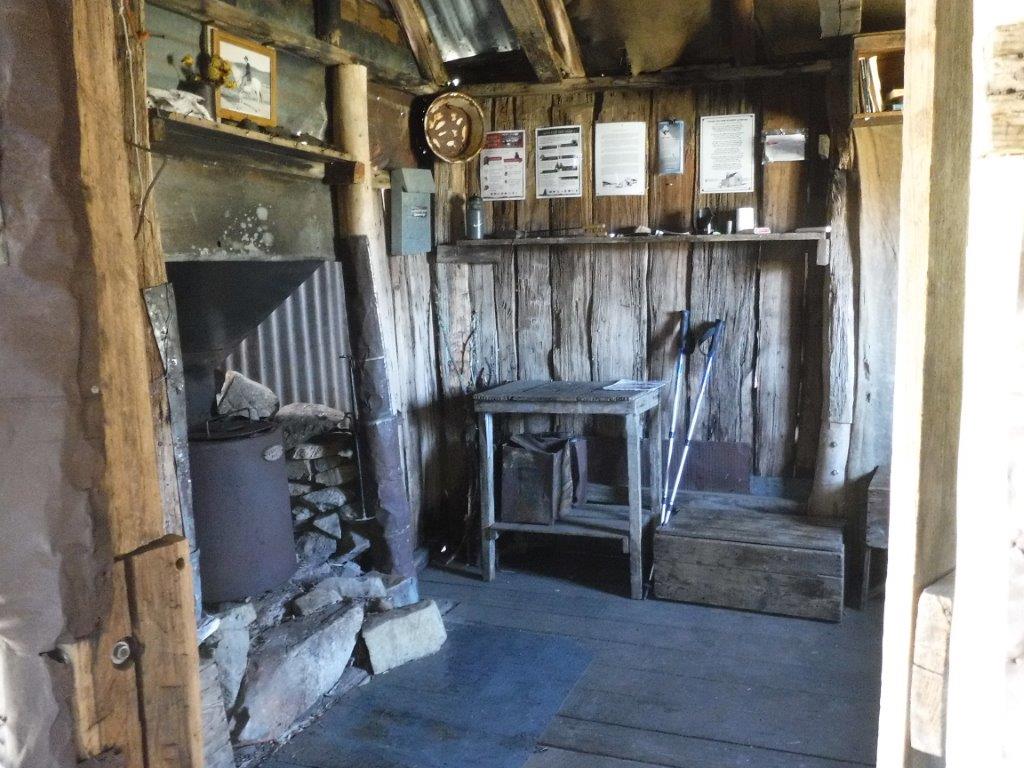 Refuge, Inspiration, Companion, Symbol, Museum, Quiet Place.
Dear 4 Mile,
We are mourning your loss.
You have always been open, welcoming and free
You have warmed our hearts, bottoms, fingers and toes
You have taken us back to harder, quieter, simpler times
You have passed on the spirit of Bob Hughes - miner, skier, hut builder, gentleman
You have kept alive important old tools, tales and traditions
You have inspired us to wax lyrical, sing you a song and record your life
You have sheltered birds, mice, lizards, wombats and people of all ages, sizes and creeds
You have given us a quiet space to contemplate and clarify the road ahead
You have seen, felt and heard everything but kept your silence and asked for only a few repairs in return.

4 Mile Hut was on 4 Mile Creek, 4 miles from Kiandra, a township also obliterated by recent fires. It was built by Bob Hughes in about 1937, in part from slabs at the Elaine Mine. It was smaller than Henry Thoreau's famous hut at Walden in the US, about the size of a small master bedroom with one four pane window, a wooden floor, a very tall iron chimney and many artefacts and wooden boxes preserved from the past. Its unique, almost iconic feature was hundreds of rusty strips of iron fastened over many cracks with flat head nails and leather washers.

After the end of grazing it was used by bushwalkers, ski tourers and occasional horse riders. In recent years it was sought out by people walking from Walhalla in Victoria to Tharwa near Canberra on the 700 km AAWT. The Nordic Ski Club (NSC) have looked after it for the last 30 years after I and others did the first restorations in 1978 and 1981. The club rebuilt the chimney twice, replaced some slabs, restored several posts, kept it spick and span and restocked the wood supply. One of their members, Bob Guy, wrote a superb song about Bob Hughes and a girl called Lilian wrote an evocative poem about the hut. People have scattered sacred ashes there.

The hut has featured in books by Pauline Downing, Matthew Higgins, Harry Hill and others including me with Huts of the High Country first published in 1982 and still in print. It has featured in a KHA huts film and in many short videos. I have almost finished a 50,000 word hut life story and now have the difficult emotional task of writing about its fiery end. I felt an urgent call to visit the hut before Xmas and was glad I did. The mountains were cool and green!

I believe there are many people who in the fullness of time would like to see it rebuilt and restored as authentically as possible.

Yours,
Klaus Hüneke (spelt the old German way)
with friends and extended family