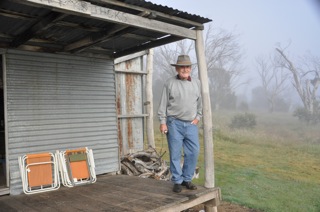 After being asked by Lis Barbaresco and Graham Scully if I would like to go to Happy's Hut with Steve Newby and his team of workers on the week-end of 15th - 16th January, 2011, I accepted with great joy. The 15th of January came and away we went, wondering what we would find. I must thank NPWS for permission to be driven in by Lis. The countryside looked beautiful after some rain.

We arrived at the Hut around 11.00 am, the last leg of the journey being completed via Steve Newbys four-wheel drive vehicle. As it came into view the excitement started to well up in me and stayed with me for the weekend.

I was very pleased with the way the caretakers and NPWS had renovated the Hut, however, I was disappointed to find that the storeroom on the southern end of the verandah had been left off. It was not the same as the original, indicated by the photo taken in 1942. This storeroom played an important role in those days. All the harnessing equipment and stores were kept there.

As I went to enter the Hut I found that my name and that of my two brothers, Basil and Kelvin, were still faintly visible on the corrugated iron to the right of the door. These had survived 69 years. My last youthful visit was in the years of 1942 - 1945. Walking around the Hut and taking photos it was great to visualise the things my father, mother and my brothers did to make the Hut liveable while we were there. My brother and I slept in a tent pitched at the southern end of the Hut. My mother and father slept in the Hut with my youngest brother.

I remembered looking out of the tent and it was snowing on Christmas morning it was great to see. I can still see my mother getting white clay near Yarrangobilly village to take it up to
Happy Jack' s so she could whiten up the fireplace. Sometimes the sheep were brought up via Round Mountain, which gave my parents the opportunity to pick up a cow and her calf from George Finch, This was so that we could have fresh milk while at Happys. Milking of a morning was always good fun. The cow and calf were returned on the homeward bound journey.

There was great excitement when we would see visitors coming across the plain, either riding of walking leading a packhorse. Our visitors mostly stayed a few days, it was great. I recalled how we filled in our days riding around checking the sheep, checking the fences and going to Old Adaminaby once a fortnight for stores or hung around the hut waiting for some excitement to turn up.

I recalled when it was time for us to pack up and return to Wagga Wagga my father said it would most likely be our last visit to the mountains as the government was closing up the snow leases. Sadly his words were only too true for us.

I wax very pleased to be able to revisit Happy Jacks at this time in my life and reminisce about a time when things were very different in the mountains. It was also good to see that the Hut was under such good care by Steve Newby and his fellow workers.