The Story of Gooandra Homestead 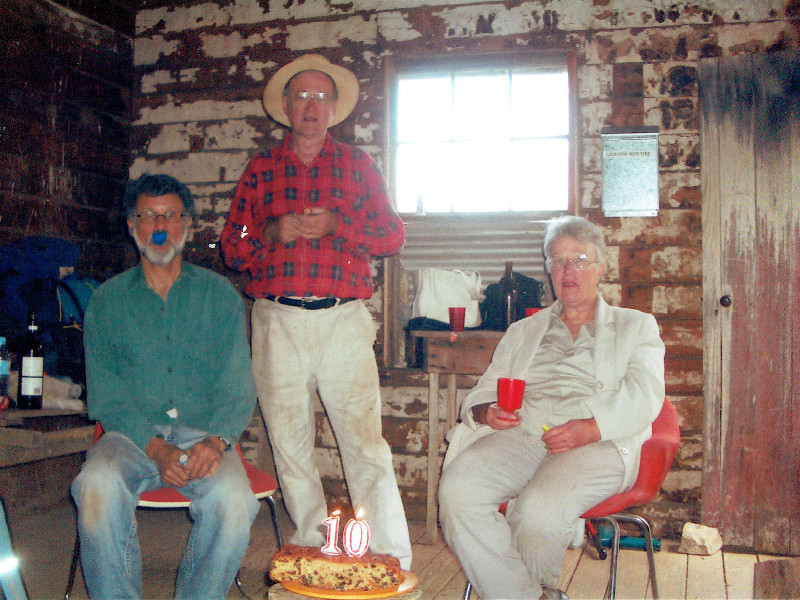 The story of this homestead has been well documented by the Conservation Study that Matthew Higgins and David Scott prepared in 1991. The homestead has a colourful history and anyone who is interested in reading it should contact the KHA library. It is located in the northern part of the Park, a good hour's walk from Six Mile Diggings near Kiandra. it was built, or actually moved from the LobbsHole/Yarrangobilly road junction by bullock wagon to its present place in about 1913. This was not an easy take! To whet your appetite for more information I will relate one more snippet of interest which might make you contact the library let alone visit Gooandra. In 1915 the then owner, Fred Lampe sent his sheep (some 3,000 head) from Coonamble by train in 30 trucks to Tumut... that is 400 miles! After which, the sheep, we walked to his lease at Gooandra! After the summer the sheep returned the same way, but this time, 32 trucks were needed on account of the fleece. It was a way of life we can only imagine today.

Grazing came to an end in the 1960s and the homestead was left to its own devices and the weather, In 1971 it was described as a ruin and by the time the Conservation Study was prepared the walls were disintegrating and the stumps rotting away. However, thanks to KHA and its intrepid volunteers, along with NPWS, the homestead was re-stumped and made weatherproof with galvanised iron sheets. A fantastic job was done, and in 1997 the present caretaker group took over from the first group to consolidate their work.

The first task was to rebuild the chimney and fireplace. We knew that it was a brick and stone fireplace and also knew what were its approximate dimensions. A few old bricks were still on site while all the stones were still there. We were fortunate in having an artisan (Get Hellerman - see photos below) who knew how to build one that actually worked! We were also greatly helped by the NPWS carpenter, Andrew (Bakes) Baker and not to forget, of course, the volunteers themselves. NPWS flew in the bricks, water, sand, cement and timber, while bringing in the remainder on the quad and trailer shows Gert and Bakes enjoying the first bit of warmth from the fireplace since the 1960s. (See montage photo)Note the keystone which is the original keystone found on site.

In the ensuing years temporary windows were put in the right places the galvanised walls were replaced with weatherboards, internal walls were constructed and many smaller items were fixed up. A major addition was the reconstruction of the northern verandah or storeroom. Bakes found the original stumps, now rotted and with his ever ready volunteers followed the directions of the conservation study and the verandah was installed.

Bake also located the rotted stumps of the southern verandah which was present in Lampe's day. The presence of this verandah has now been documented by Matthew Higgins and adopted as part of the conservation study. it will be the last major work on the homestead to completes its historic reconstruction.

Other minor work still needs to be done; the temporary windows need to be replaced with permanent ones, other internal walls need to be completed and other small tasks. Gooandra Homestead is nearing completion and judging from the numerous comments in the visitors' book it has become a wonderful shelter in bad weather, the descendants of the Lampe family visited last year (2004) and wrote in the book how very pleased they were with the effort of KHA in reconstructing their family history and thus that of the heritage of the park.

What of the future? Well, once the work outlined above has been completed the homestead should approximate the historic building in which the Lampe family lived. A toilet similar to the two holes (as outlined in Matthew Higgins' study) should also be built as with the increased usage.

There are not many huts left in the park after the 2003 fires and the real remaining history exemplified by Gooandra Homestead, built next to the remains of the oldest miner's hut in the Park, is truly a historic site and one of the few original buildings still standing.

Editor:In the SPRING newsletter on p13 Elouise Peach (NPWS) Tumut sent in photos of Gooandra flaunting its new verandah. Below is a photo sent with this report of the homestead as it was: the Miner's Hut was in use as a kitchen for the homestead at that time. From the Conservation Study Miners' Hut: was a two-roomed horizontal slab building with a gable roof of shingles and a verandah along the eastern side. The south wall of the building was occupied by a full-width open fireplace with a corrugated iron chimney. the building was being used solely as a kitchen (c.1915) and possibly as late as the 1930s.

Workparty Photo Gallery - click on an image for a larger view.