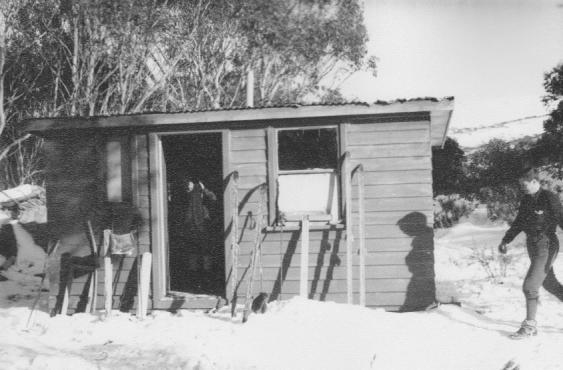 Disappointment Spur Hut was constructed by the Snowy Mountains Authority c1956 as a maintenance shelter for the Munyang River Aqueduct, accommodating staff servicing the weirs and pipeline which extend 9.7 km from the creek just east of the hut in a downhill grade around the valley to the surge tank and penstock above Guthega Power Station.

Disappointment Spur was first grazed in the mid-late 19th century. It was part of the Murryang or Munyang squatting run, which extended along the main range from south of the Bulls Peaks to Mt Kosciuszko. Stock were brought from Snowy Plain over Brassy Gap into the Burrungubugge valley, then pushed out onto the alpine pastures of the main range from November through to April.

The Snowy Mountains Scheme was commenced in 1949, with the first hydroelectric project being the Guthega Dam and Power Station, built 1951-55. In the early years of the Scheme, aqueducts of buried concrete pipe were used extensively to capture water from lesser creeks and rivers and feed them into power stations. From 1953-55 Selmer Engineering constructed the Munyang Aqueduct, with its 16 weirs and concrete water pipe ranging in size from 300mm diameter at the first weir to 1300mm in the last section to the surge tank.

Disappointment Spur Hut is believed to have been built upon the completion of the aqueduct, from two of the standard prefabricated ‘snow huts’ used by the SMA and its contractors across the Scheme, sourced from the camp at the Guthega Power Station or from Island Bend township.

Shepherd camps are recorded in the vicinity of Dicky Cooper Creek during the 1870s, with stock being brought into the area via Snowy Plain. Graziers recorded as holding leases over Disappointment Spur include Donald McLure (1919), Woodstock Pastoral Co (Snow Lease Block K1 1929), HJ Willis with MR & WT Connors (Snow Lease Block C1 1943-50 and 1950-53). Grazing was terminated in the area due to Snowy Scheme works.

Work on the Snowy Mountains Scheme commenced in 1949, with the Guthega Dam and Power Station being the inaugural project, constructed 1951-55. In the first decade of the scheme, the engineering included extensive use of minor aqueducts to capture as much snow melt off the main range as possible. The Guthega project included two minor aqueducts (Falls Ck and Rams Head Ck), and two major aqueducts (Pipers Creek and Munyang River). Aside from the Geehi Aqueduct built in 1966 as a consequence of Geehi Dam being forced upriver due to geological faults at its original site off Watsons Craggs, much less use was made of aqueducts in the second decade of the Scheme as they were costly pieces of infrastructure to install and maintain.

The Munyang River Aqueduct was built by Selmer Engineering 1953-56. It collects water from the eastern and western tributaries of the Munyang River in a 9.7km run from Disappointment Spur to the surge tank above Guthega Power Station. There are six weirs along the eastern side of the valley, the main weir on Munyang River, thence nine weirs along the west side of the valley. The aqueduct pipe starts at 300mm diameter, is 900mm as it leaves the main weir at the river and 1300mm by the time it arrives at the surge tank.

The pipe is buried, and has numerous vent pipes along its length to balance pressure through dips and rises. Initially the pipe along the west side of the valley included a number of elevated viaduct sections across gullies behind Horse Camp, where the pipe was supported on concrete legs with a small flat capping on top that people could walk or (tentatively) ski across – however these elevated sections were removed when the pipe was replaced c1990.

Disappointment Spur Hut is one of three shelter huts located along the route of the aqueduct, the others being Horse Camp Hut (a modified grazing hut), and a locked maintenance hut at the main weir.

The hut appears to be an amalgam of two prefabricated ‘snow huts’ — 2.1m square weatherboard huts with a flat roof of corrugated iron, widely used by the SMA and contractors across the Snowy Scheme. The hut units are bolted onto two long rails suggesting it may have been dragged to the site. The hut was originally painted bright red with white trim, a standard colour scheme on remote SMA huts.

The hut first appears (unlabeled) on a c1955-58 SMA map. It could date from the construction of the aqueduct, more likely it was installed by the SMA as a maintenance shelter on completion of the aqueduct and came from either Guthega or Island Bend work camps.

Through the 1960s the hut was used increasingly by bushwalkers. In 1971 the hut is recorded as containing a small stove, table, shelves and a bench. A two tier sleeping platform, rainwater tank and kitchen cupboard unit with sink was added in the mid-1970s; all but the sleeping platform were removed by 1988. A pit toilet was provided in 1988 but destroyed in the 2003 bushfires. The stove was replaced in 1997 but removed by 2002.

Situated within the popular Whites River Corridor, the hut receives heavy use from walkers, cyclists and skiers, particularly groups undertaking their first trips onto the main range.

The Munyang Aqueduct weirs along the trail from just east of the hut to the road, can be heard and visited with a short walk.

The route along the crest of Disappointment Spur to/from Mt Gungartan provides some outstanding views of the main range, albeit requiring considerably more exertion than the trail.

Toileting – no pit toilet. Use the aqueduct trail to go some distance away from the hut.