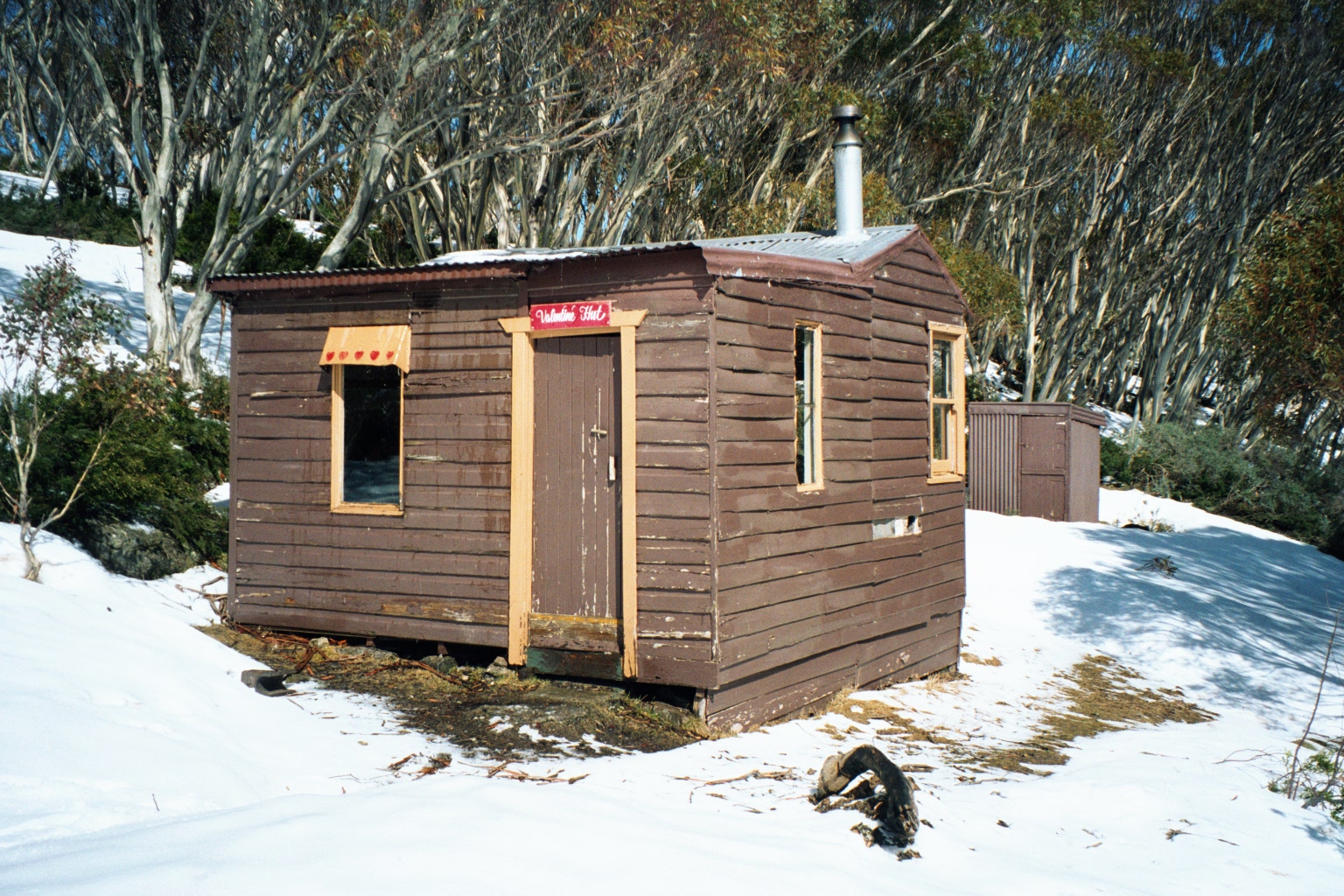 Valentines Hut was constructed by the Snowy Mountains Authority in 1955 as a base for hydrologists monitoring precipitation, snow depths and stream flows on the Geehi River and its tributaries, to aid planning for the Geehi Reservoir and the Murray 1 & 2 Power Stations.

Grazing upon the north end of the main range commenced in the mid nineteenth century. Prior to 1940, a shepherd’s hut was built in the vicinity of the current hut. A small and crude structure, it appears to have been a ruin by the cessation of grazing above 4500’ in 1954.

Hydrological survey of the Geehi River had commenced by 1955, to ascertain the amount of water available for power generation at the Murray power stations. Measurement apparatus included flying fox-type gauging stations on the Valentine (~80m down from the trail crossing), and on the Geehi (~750m NW of the hut), a weir and gauging station on Straight Creek below the Grey Mare Trail, snow gauging poles along Duck Creek, and weather stations.

Valentines Hut was built under the direction of SMA hydrologist Arne Kirkemo, who also built Cootapatamba Hut. It comprised two standard SMA prefabricated ‘snow huts’, with a common room/kitchen between, plus a storage shed out back. The hut was fitted with a radio and measurements were taken year-round, the hydrologists either skiing in or using tracked oversnow vehicles during the winter months.

The gauging stations had been closed down by 1964; when the hut was visited by the Exclusive Squirrel Club in 1967 they found it had not been occupied for a long time.

Pastoralists were grazing stock upon the main range by the mid-19th century; the Valentine and upper Geehi River catchments. Cattle and sheep were grazed, the stock brought up each summer from either the Monaro via Snowy Plain or from the Upper Murray via Toolong Plain (nowTooma Reservoir).

Through the 1890s through the early 1900s Archibald Rial is believed to have held grazing leases over most of the land between Happy Jacks and Schlink Pass, the land south of the Valentine may have been taken over by John Coughlan in the 1920s although appears to have been with David McPhie by the 1930s. A boundary fence between the McPhie’s lease over the Ghost and the Bobundra lease over the Kerries and Mawsons Hut ran down the Duck Creek to the Valentine River just east of Valentines Hut.

In January 1940, the Commissioner of the NSW Soil Conservation Service, ES Clayton, and George Petersen visited a stockmen’s hut near the current Valentines Hut whilst on a 4 ½ day tour of the main range to assess the environmental impacts of the 1939 bushfires. They rode with packhorses, being joined stockmen/skier Ray Adams at Whites River. Travelling between The Ghost (hill) and Valentine Falls they called in at the hut and had “a few words with the old shepherd” in residence. Arthur Harris, a stockman at Mawson’s Hut, later told them the shepherd was known locally as ‘Fleecy-lined Underpants”.

The exact location of the shepherd’s hut is unknown and this is the only reference found of it. Numerous ski tours down Duck Creek and past Valentine Falls are recorded in the Australian Ski Yearbook between 1930 and 1960, but nor mention this hut, nor does it feature on any parish, snowlease or SMA maps. This suggests it was a minor rudimentary structure of no shelter value to skiers, and/or was shortlived.

The major components of the Snowy-Murray Group of projects including Island bend, Geehi, Murray 1 & 2 and Khancoban Reservoirs, associated pressure tunnels and the Murray 1 & 2 Power Stations were constructed 1962-69.

Hydrological survey of the Geehi River had commenced by 1955, to ascertain the amount of water available for power generation at the Murray power stations. Measurement apparatus included flying foxes and gauging stations on the Valentine (~80m down from the trail crossing), and on the Geehi (~750m NW of the hut), a gauging station weir on Straight Creek below the Grey Mare Trail, snow gauging poles along Duck Creek, and weather stations. Snow samples were also collected to assess density, using an aluminium tube with sharp steel cutters, which could be dismantled into sections for Carrying in a pack whilst skiing.

Valentines Hut was built in1955-5under the direction of SMA hydrologist Arne Kirkemo, who also built Cootapatamba Hut. The site form suggests a bulldozer was used to create a level terrace on which to sit the hut and shed; also likely used to create a trail in from Munyang for trucks carrying the snow huts. The structure is somewhat unusual, in that it features two standard SMA prefabricated ‘snow huts’ of size 2.1 x 2.1m (7’), positioned either side of the building as bedrooms, to which a gable roof structure was then added onsite to create a central common room/kitchen, an entrance hall and a rear storeroom. The central room was fitted with a bench and steel sink along its east wall, a Raeburn wood heater on its north wall, some fixed shelving and loose table and chair. The bedroom to the north had a freestanding bed and shelves; the bedroom to the south had a built-in double bunk. The building was insulated with Malthoid (bituminous felt), floor was covered in linoleum, and the entrance hall was fitted with an (internal) insect screen door. A corrugated iron storage shed ~2 x 2m was situated ~4m to the south.

The building was designed to be used by teams of two, an SMA hydrologist and their assistant. Each bedroom had a locked steel trunk in which equipment and provisions could be secured whilst the building could be left unlocked as an emergency shelter.

The hut was fitted with a two-way radio. During the winter of 1956 SMA hydrologists Tony Sponar & Bob Janata skied from Happy Jacks to Spencers Creek whilst keeping in contact with ‘Andy’, the radio operator Valentine Hut.

Measurements were taken year-round, the hydrologists either skiing in or using tracked oversnow vehicles during the winter months. During the 1950s that would have involved a trek in from Munyang (Guthega Power Station), along a jeep track. From 1962, completion of the Schlink Pass Road and fire trail through to Grey Mare via Valentines improved access. There are reports of 2WD family cars driving from Guthega to Happy Jacks township in the mid-1960s via Valentines and Grey Mare, a feat that would be impossible today.

Many of the early hydrologists came from European alpine countries and were well suited to this type of work. Tom Frece, a hydrologist and member of the Thredbo Ski Patrol, remembers the SMA Hydrology Branch comprised many former Olympic and active racing skiers during the mid-1950s and early 1960s. Tom spent a lot of time at Valentines, sharing the hut with an increasing number of —recreational users:- Tom recalls many Duke of Edinburgh Award participants attempting to ski Kiandra – Guthega, stumbling into the hut frozen and often unprepared for the extreme conditions. The hydrologists would offer tea and food, and on occasion transport participants’ packs on the snow-cat if they were headed in the same direction as the skiers.

In 1962 construction commenced on Geehi Dam and its pressure tunnels, and SMA maps indicate all of the gauging stations around Valentines had been decommissioned by 1964. The SMA continued to use the hut for some hydrological survey work up to 1969, although on a 1967 ski tour the Exclusive Squirrels Club ”came upon the Valentine hydrology hut lying in the shadow of the Ghost mountain. It was unlocked and looked as though it had not been occupied for a long time”.

The KHA and caretaker Guthega Ski Club re-fitted the hut for recreational use in the 1980s. The Raeburn stove was replaced, the kitchen bench was removed, the bunks were replaced, the shed was removed. In the 1990s the caretaker Coast & Mountain Walkers worked with NPWS on repairs to the foundations, piers and walls, the shed was removed, and the original toilet — widely voted as having the best view of any in the mountains — was replaced with a new pump-out type. Eventually the hut was restored to its original bright red colour scheme.

Valentine Falls can be found 1km west of the hut along an overgrown foot track, which continues on to Grey Mare via the concrete weir on Straight Creek. The route through to Grey Mare is not recommended with packs, unless walkers are highly experienced and fit.

Water – abundant in Valentine River during any conditions.

Firewood – modest availability along ridge to south or east.

Camping – reasonable sites in front of hut and down trail toward river.