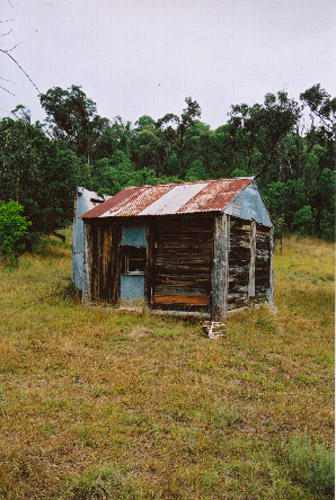 Special acknowledgment is made to the contributions of Wal and Barry Kell, and the valuable assistance of David Hewitt in conducting these interviews.

Early Use Of The Site

" The Emu Flat area was probably settled in the late 1860's - gold miners moving to the region from the declining Kiandra diggings.  Bill Stokes is believed to have built his house on the west bank of the Goobarragandra River at some time during the 1860's, and soon after this an alluvial miner called Billy McLaren built a hut on the east bank.  From the hut Cecil Piper used to visit the miner and his nephew Peter McLaren.  The 300 or 400 acres that the McLarens held were later acquired by Jack Elliot, who also held a 13,000 acre lease between Emu Creek and the Broken Cart stock route.  Later, George Harris from Argalong acquired the combined freehold land.It was then sold to Wal Kell (who had married George's sister Mary) ...

" On the north-western bank of Emu Creek, opposite the shingle roofed McLaren's Hut ruin, was a slab hut with a bark roof belonging to another miner who is believed to have died there and been buried nearby ("this hut was still standing into the 1930s", Wal Kell).  Like McLaren, most of the men who worked in the area worked sluice boxes - the race lines still traverse the local topography. A more elaborate mine was found near Stoke's Hut, 2 kilometres south-west of Kell's Hut."

In 1942, Wal Kell purchased 40 acres of freehold land and 320 acres of leasehold in the area of Emu Creek.  Wal was born at Lacmalac, east of Tumut. His first job was at Brungle in 1929 and he later spent four years working on the Gooandra Run, prior to acquiring the land on the Goobarragandra River.

There was no vehicle access to the property in 1942, only a track suitable for a pack horse.  Wal used a small 'jinker' pulled by one horse to transport materials and equipment to the property.  The freehold land had been extensively ringbarked and then let go, leaving no suitable timber for building with only wattle and black sallee remaining.

The hut was built in 1943 by Wal and another man, possibly Jack Venables, who assisted for one day each week.  Wal and Mary built the chimney in a day using a mud mortar and stone from the Mclaren's hut chimney, all that remained when the hut burned down sometime prior to 1920.  Timber for the slabs and structure was brought from the leasehold land which still contained a large number of older trees. 'Messmate' (red stringybark) was used as there was "no mountain ash for miles".  Flooring of stringy-bark and the corrugated iron for the roofing was transported by truck from Tumut to the roadhead, 4 miles (6.5 km) downstream on the Goobarragandra.  From there, the little 'jinker' was used in relays to bring the materials upstream to a point near Stoke's House, 1km south of Kell's, where the materials were taken across the river on a "slide".

The walls were lined internally with hessian sacks.  Wal furnished the hut with a variety of pieces, most of which he fabricated himself from packing crates and split timbers.

Later, a road to take a horse and sulky was built to provide access to Stoke's House, and this was eventually incorporated in a fire trail constructed by Arthur (Bruce?-ed) Cotterill for the Hume-Snowy Bushfire Council.

A Permissive Occupancy lease allowed Wal Kell to graze cattle on the property all year round, in contrast to the six month summer leases on the high plains. He cleared the land of all rabbits, grazed cattle there and used the hut as shelter until 1974 when the NPWS resumed the land for inclusion in the Kosciusko National Park, taking possession in 1975.

Since Inclusion Within Kosciusko National Park

A 1978 NPWS report described the hut as being in sound condition and containing several items of furniture and assorted relics left over from its use as a stockman's hut.  At the time the hut was being used primarily by fishermen.  Photographs show the bottom half of the chimney clad with a flattened 44-gallon drum across the back and horizontal corrugated iron at the sides.  Additional sheets of vertical corrugated iron had been folded around the corner posts - possibly a later addition to the original design to provide increased weather protection to the chimney structure.  The upper half of the chimney was clad with vertical corrugated iron.

In 1983, a maintenance workparty replaced the two primary chimney posts and a horizontal cross-brace at the top of the chimney.  The chimney was then entirely reclad with vertical corrugated iron. At the same time, the height of the stonework on each side of the fireplace was reduced, with the extra stone used to increase the height of the back wall.  The 'billy bar', which had originally been fixed into the stonework at each end, was left resting unfixed on top of the side walls.  It was noted at this time that the door head had been removed and the sign "THIS HUT IS PRIVATE PROPERTY" had been removed from its position above the door and placed inside the hut.

The doorhead had presumably been removed to give vertical clearance for the door which was dragging on the floor due to the decay and subsidence of the corner posts.  Evidence on the corner posts indicate that the door has been rehung in a position about 100mm higher than earlier.  The sign has since been rehung above the door internally, and the billy bar has been removed and lost.

Between 1987 and 1989, minor works were undertaken by the caretaker group, including propping of the centre post and slabs in the south-east wall, repair to bullet holes in the roof, reglazing, re-mortaring of loose stonework in fireplace using a clay mortar.

Major works are now required due to extensive decay in the posts, bottom plates, and floor structure.

The site is currently used by fishermen, canoeists, and bushwalkers, with illegal use by a number of shooters, trail bike riders and four wheel drivers.  Usage is considered to be light in numbers although no accurate figures are available.

The site consists of Kell's Hut and associated minor features such as remnants of fence lines and several deciduous trees which are scattered around the perimeter of the cleared flat.  Remains of a stockyard are located approximately 1-2 km east of the hut but this requires further investigation.  Located close to the site are several ruin sites and features associated with mining of the area prior to construction of the hut.

Kells is a very quaint slab hut, approximately 10'(3m) square with mixed horizontal and vertical slab construction, and a corrugated iron roof and chimney.  Floor is of sawn timber boards.  Features include a small window with iron sunhood on the north wall, and evidence of hessian linings.  Interior is very spartan with a small table and a mouldy mattress.

Access is via the Stoke's Hut management trail, either in a steep & eroded 4km descent from the forestry trails to the north or the longer but easier approach following the Goobarragandra River. Good camping in the very sheltered clearing; water and firewood are readily available. No toilet at the site.

Kell's Hut together with the remains of outlying structures and exotic plantings across Emu Flat, reflect the white mans' development and use of the northern montane region of the Kosciusko National Park over a period of 100 years up to 1975.

Several sites associated with mining along Emu Flat Creek during the latter half of the 19th century are located in close vicinity to the hut.

As a stockman's shelter, Kell's Hut directly reflects the period of pastoral development and management within the Alps prior to the formation of the KNP, and the design highlights the rudimentary shelter requirements of stockmen during that time.

The building exhibits several vernacular construction techniques.  The use of materials reflect the common stockman's practise of using available timber from the site or nearby and transporting in more modern materials such as iron for specific building elements such as roofing & chimney, where their use is more practicable.

Despite it becoming overgrown, Emu Flat exhibits some aspects of an early pastoral landscape through the remains of fencelines, and exotic plantings which were used for food or as a subdued attempt to recreate a European-Australian homestead landscape.