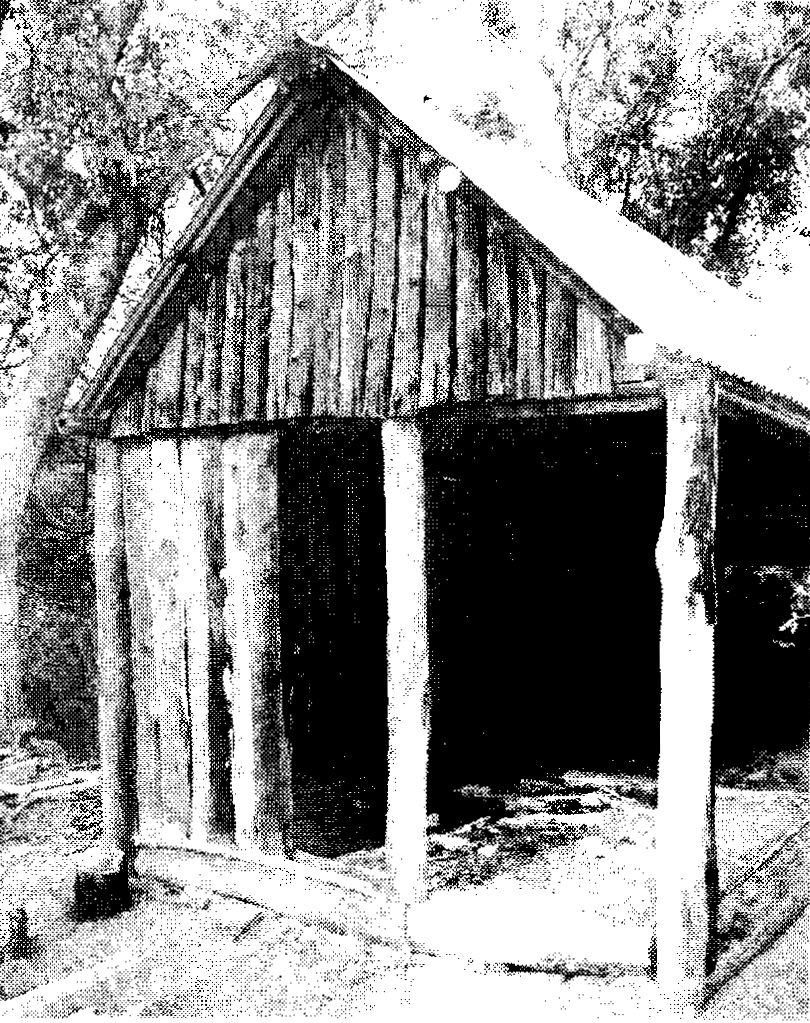 As the fires approached Paupong in 2003, Raymond Wroe took the initiative to save Charlie Rugman's hut by carefully numbering and disassembling the building to remove from the site.

It remained that way until NPWS Ranger Janice Cawthorn located the remains at Raymond's Berridale property, and commenced the process of rebuiling a unique Snowy River Hut. Uwe Petersohn, the NPWS carpenter was given the task of restoring Rugman's with the help of Raymond and Rita Wroe's advice and information gathered sduring the compilation of a Haritage Action statement (HAS).

After surveying the remains of the materials, Uwe set about gathering suitable timber to replicate those lost through old age. To keep the authenticity of the building Uwe sourced timber which was burnt or died in the 2003 fires. White box posts, yellow box ground plates and cypress (Callitris spp) rafters and slabs. It is these cypress slabs which give Rugman's its unique quality as few if any other huts in this area used slabs from this tree as the exterior cladding.

Charlie must have had a good eye for timber as Callitris does lend itself to slabbing as some other local timbers do. Uwe overcame this problem and after some initial experimentation with traditional techniques, he cut the slabs with his trusty 365 Husky! This allowed the use of dead, fallen local logs without searching the entire region for for a dead, straight splitable stock. Once cut the slabs were trimmed up using the adze.

Cypress saplings were utilised by Charlie in the interior of the hut as well. The rafters, slab retainers and cupboard were entirely fashioned from this resource. Several rafters and slab retainers had been lost or decayed and the ends due to exposure and required replacement. There are hundreds of donors close to the hut so they were cut and debarked for installation.

The corner posts were generally in good order, however a couple had succumbed to the elements and needed renewing. On this occasion, Uwe set off down the lower Snowy to find some donor specimens. Having travelled the area over many years he kept an eye out for dead standing or fallen trees that may be useful in his restoration projects. In this case it was a fire victim near the Pinch River, Eucalyptus mellidora, Yellow Box. Uwe had a job to load the 4 metre length onto the Landcruiser without any modern technology, but being the true improvisor, Uwe had a plan. So, once loaded he set off for the posts, White Box of course, as it will last a lifetime or two in the ground.

Once the raw materials were collected Uwe began the restoration, usually alone but often with the help of willing assistants, all eager to learn the ways of the old. Base logs in and levelled, corner posts plumb and true, rafters in, things were going well. Several weeks had now elapsed, weather was favorable for building, as it is in drought, and with the help of the local dog trapper the Lygaht Orb roof was installed. Walls were placed and door swung, then the interior needed some TLC. The floor was a mess due to rabbits and required pulling up and relaying. The existing thin concrete slab was interspersed with flat cobblestones, no doubt to save on mud, so Uwe replicated this product. The lining of the hut was also replaced with a similar product to the original. Thin cardboard, overlayed with Hessian gave the hut it's 5 star energy rating.

The fireplace then came in for some attention. The rock Charlie used had suffered from the heat and decayed. Help weas enlisted to collect some local material, taking care not to displace any native inhabitants in the process, whilst Uwe put on his stonemason's hat to rebuild the fireplace. Once done the original tin cap was checked over then installed atop the fresh stonework. Guttering was scavenged to replace sections that had been lost or corroded and the old tank was cleaned out ans set to go.

The surrounds of the hut needed a clean up as evidenced in the KHA shot of the hut. Wattle trees and dogwood abounded, so some selective clearing and pruning as recommended by the HAS was undertaken. The milking yard was cleared of shrubs and dead wattles at the same time. This was primarily done to mitigate the chance of fire damage in the future and will require ongoing attention from the caretakers.

So if you find yourself on the Devil's Hole Firetrail walking along not far from the Ange paddock, keep an eye out for the beautifully restored Rugman's Hut in the Byadbo Wilderness.

From the KHA Newsletter, Spring 2007