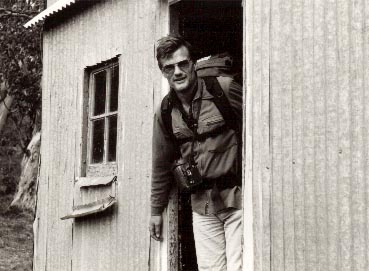 The Mountain Huts: A Lengthy Involvement

Klaus seems to have been linked to the Kosciusko Huts forever. He is the well known author of "Huts of the High Country", generally considered the definitive book on the topic. Klaus is a long time member of KHA and one time HMO. Here is his account of his life, in a nutshell!

Klaus was awarded the Member of the Order of Australia in 2012:

For service to conservation and the environment as an historian, author and photographer, and to the preservation of Australia's built heritage, particularly in the Snowy Mountains region.

1953  -  I was nine years old when my father came home from three weeks of skiing in the Austrian Alps. Saw many 8mm home movies featuring skiing and mountain huts in the Austrian and Bavarian Alps. There were also lots of photo albums to look at and many adventures to listen to.

1958  -  After arriving in Orange in 1955, we went skiing at Thredbo. It had about twelve half finished lodges. We made a day tour to Mt Kosciusko.

1967  -  My first long bushwalk in the high country - started on Mt Kosciusko and followed the main range to Jagungal. It finished at Perisher and took in about eight mountain huts.

1973 to 1976  -  Moved to Canberra and joined the KHA in 1974. Many long bushwalks and ski tours to huts. Started making notes and taking photos at Four Mile hut. I had a hunch that the more we knew about the huts the more likely we were to save them.  Discovered that much of the history of the huts was in the heads of old timers and that I had to interview them. In time, myself and others made about 100 interviews. I began to write feature articles about the mountains and the huts - there are now about fifty. Celebrated 50th Anniversary of the first winter crossing from Kiandra to Kosciusko. Bill Hughes, my first interviewee, came to Kiandra. The 75th Anniversary is next year and there is talk of celebrating it again.Made a twenty minute feature film about the huts. It was 'premiered' at a Labour Party gathering in Queanbeyan. It is on a KHA video.

1977  -  Became Huts Maintenance Officer for three years. In those days this meant looking after all the huts in KNP. Arrangements with NPWS were pretty loose, there were no conservation plans. If work needed doing all I usually did was notify the ranger of the date and the nature of the work. I was involved in work on Boltons, Witses, Four Mile and Boobee, amongst others.

1980  -  NPWS released a draft policy document in which they proposed to remove half the huts between Kiandra and Kosciusko plus all the huts on the Main Range except Seamans. The shit hit the fan (to put it quite bluntly) and we conducted a big campaign to save the huts. I became president of KHA and had my hands full. Hundreds of people supported "the Cause" and we were successful in saving all huts except two sacrificial lambs, Albina and Rawsons.

1982  -  ANU Press published 'Huts of the High Country', selling 5,000 copies in the first year. I've kept it in print ever since. Many people still consider it the bible and refer to it whenever they go on a bushwalk or ski tour.

1987  -  In doing the research for the huts book I discovered many interesting and well written articles about journeys across the high country. They became the foundation for the book 'Kiandra to Kosciusko'. I started to contemplate a three volume history of the high country.

1988  -  Paddy Pallin and I (to a lesser extent) attracted a wall to wall crowd to a talk and slide show at the Griffin Centre. It was one of Paddy's last talks.

1991  -  Published 'Kosciusko - where the Ice-Trees Burn', a book of colour photos including many huts. Neville Reece organised the taping of slides and voice for a KHA video.

1995  -  I finally found the courage and the helpers to finish 'People of the Australian High Country', the third volume of a history of the high country. Pauline Downing, Graham Scully, Chris Moger and many, many others, helped with transcribing interviews. The book's launch in Berridale was the biggest gathering of old timers in a long time. Donated 10% of sales to KHA.

Published 'One Step at a Time', an autobiography centred around journeys into the bush including those of my parents in Europe in the 1930s. KHA purchased 120 historic photos for the Collection.

Donated sets of my books to be placed in five huts - Mawsons, Wheelers, Grey Mare, Daveys and Burrungubuggee.

2003  -  Published 'Huts in the Victorian Alps and the people who care for them'. As a result of its success, donated $1000 to the Victorian High Country Huts Association.

2008  -  Klaus is working towards a book of landscape photos about the South Coast of NSW. His book distribution business Tabletop Press is now 21 years old. It supplies books on the high country to about 50 shops.

1989 The mountain huts of Tasmania. Heritage Australia, Spring.
If you go down to the woods. Bogong V 10 No 4.
Photo, ACF Wilderness Calendar

1994 Winter tragedy on Mt Kosciusko, Wild, No 52
PEOPLE OF THE AUSTRALIAN HIGH COUNTRY Tabletop Press (Book)
Photo Wilderness Diary
Photos in Skis on the Brindabellas and Searching for the Snowy.

2011 STRING OF PEARLS - the South Coast of NSW. Book of photos. Tabletop Press.
Photos in huts calendar and various newspapers.

About a man called Klaus Hueneke

I was born at the end of a long and trying labour, in Rolfshagen, a tiny village near Rinteln,
Germany. It was just before the Nazis finally capitulated. With the rest of my family I cruised across
to Australia on a very big ship in 1955 and lived in a simple fibro cottage on a hillside called Glenroi
Heights in Orange for seven years. Most of the time at Orange High I was confused, out of my depth
and terribly self conscious but still clever enough to get to Teachers College.
I've been a jack of many trades and, until about twenty years ago, master of none. I've tried my
hand and brain at teaching manual arts, photo-journalism, environmental planning, being a meticulous
academic, ski instructing, mountain guiding, running adult education courses and, not to forget, being
a father and partner. I have lived in Newcastle, Yanco, Dapto, Wellington, Sydney and Canberra, and
in an ashram near Bombay for a month.
One of my passions is the Australian Alps. I have photographed them, interviewed numerous
old timers who were born around them, skied and walked them from one end to the other, and by
degrees managed to turn them into something I could make a living from.
The BIG breakthrough came in 1982 when ANU Press published 'Huts of the High Country'.
Now in its seventh printing it has sold 14,000 copies, a great start for a writer. Having seen what
publishing was all about I set up Tabletop Press in 1984. Initially I published my own books,
eg, 'Kosciusko - where the Ice-Trees Burn' and 'People of the Australian High Country', but having
developed expertise in this field I was soon called upon to help others. They included Alan Andrews
with 'Kosciusko - The Mountain in History', Matthew Higgins with 'Skis on the Brindabellas' and
Gwen Wilson with 'Murray of Yarralumla'. I've collaborated with Mark O'Connor, the Olympic poet,
on a volume of poetry and photos called 'Tilting at Snowgums' and I've reprinted some old classics.
Having printed these books they needed to be sold, so with loaded campervan I took to the
road and covered numerous bookshops in Sydney, Brisbane, Melbourne and sundry watering places in
between. I discovered that I could be a specialist wholesaler of books about the Australian Alps and
proceeded to buy in books from other publishers.
In 1996 I decided that I would suspend writing about the life and adventures of others and
write about my own. This turned out to be much more demanding than I had thought especially if I
was to be honest and sincere about it. The result was 'One Step at a Time'. Since then I have produced
the award winning book - Huts in the Victorian Alps and two photographic books - Mountain
Landscapes and Historic Huts and A String of Pearls - the South Coast of NSW . In between books
I've produced over 100 feature articles and photo essays for magazines and newspapers.
Im an honorary life member of various clubs and in younger days obtained many Life Saving
Awards including the Award of Merit and the Distinction. The interest in life saving followed my
clumsy rescue of two people from the Georges River when I was 14 years old. At university I
completed an arts degree with honours and a Master of Science in plant ecology. I belong to an
exclusive, but quite large club who did not complete a Ph D. University taught me many things but not
how to make a living. Life taught me that. It also taught me that if you enhance your community with
a substantial body of work you may get an Order of Australia. This happened in 2012.
Ive had a number of dramatic dalliances and three meaningful, long term relationships with
women (in tandem and not like some Mormons, all at once!) and am now married to Patricia, a herbal
medicine practitioner. I have, over the years, helped to bring up six children, two of whom are my
own. I now have five grandchildren, Jarrah, Angus, Zoe, Ben and Hailey.
I love Australia and being an Australian, and, having sung the stirring words in several choirs,
think that our national anthem should be 'I am Australian'. I tend towards Republicanism but have a
soft spot for the current queen. I would like our parliament to be more inclusive and less adversarial. I
follow an ancient spiritual tradition called Siddha Yoga and like to meditate and chant.
More than anything else I'm a human being trying to make sense of life, death and all things in
between. I've had fleeting glimpses of the Holy Grail but not yet grasped its full splendour.