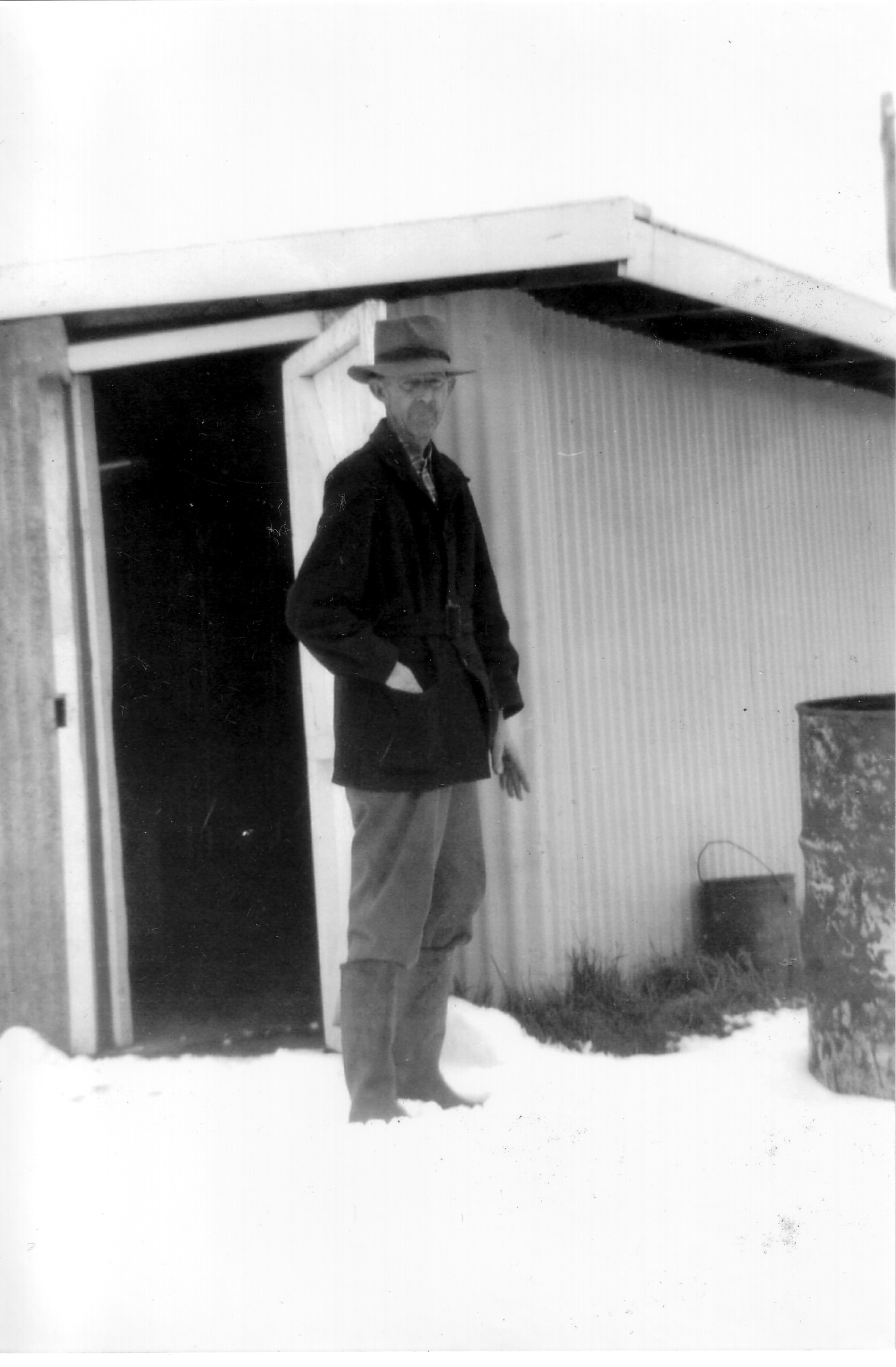 Gwen Hubert (nee Wellsmore) has sent the attached photo of Bill Kerwin at the door of the hut he used when looking after stock in the Dainers gap area.

It is one of two huts we know existed there and is likely to be the one just west of the Rainbow Lake track (David Scott advice).
Below is some of what Gwen has written as a preliminary record:

It may be of interest to you that my uncle by marriage had a hut just off the road after you passed the Hotel Kosciusko. He was Bill Kirwan and he was living there in the summer time to mind sheep. The hut would have been removed by the Snowy Mountains Authority in the course of their work. It was corrugated iron and there was a lovely little stream at the door, clear running water and grassy banks. I think it was about two miles past the Hotel.

Bill Kirwan comes from the very early Kirwan family who pioneered Cooma or Kuma as it was known then. You may know that story. Bill married my mother's sister Jean Williamson of Kalkite. They lived at Jindabyne in a house that had been the old Butter factory building on Factory Creek at Jindabyne. It was removed from there and moved to a site on the eastern side of the river and re-erected.

Bill was a good tennis player and played on the courts at Jindabyne. He looked after the caravan park at the bend of the river near where they built the low level bridge for the SMA. Bill also had a market garden in Jindabyne, next to their house where he grew lettuce, odourless onions, carrots parsnips etc. People came there to buy his fresh produce.

He had a pump on the river just below the bridge, and pumped water to a large tank above the vegetable garden which was on a fairly steep hill (Good drainage no doubt). I stayed with Jean and Bill when the school closed at Paupong to continue my schooling. Because I was accustomed to riding a horse to school, Bill provided me with a horse. School was of course on the opposite side of the river, so I rode the mare over the bridge , past the school and up to the dump, which is where Jindabyne is now and left her there for Bill to take home so I could ride her next day. The mare had a foal at foot so I was delighted with this arrangement, which only continued until the end of term.

Bill was a man of few words, and he liked to recline on a divan in the kitchen and read F.J.Thwaites novels. I have been speaking to Gordon Bottom about Bill Kirwan and he is happy to have the story written about the hut.Gordon thinks history should bepreserved.Bill was looking after the sheep belonging to Gordon Bottom's father EdwardJohn (Ted)Bottom, and did so for 14 or 15 years. Sometimes Ted Bottom took the snow lease with Les Sturgeon who had a sheep farm near Ted Bottom around the area of "Hilltop".

The snow lease extended from Rennix Gap to Dainer's Gap. There was a wire fence at the top of Thredbo Falls. Bill had to make sure the sheep were safe from dingoes which wasn't much worry in those days because pure bred dingoes were put off by the fence , not like wild dogs of today who will come through wire fences. Near the falls there was a huge rock called Moon Rock and from the top of that you had a magnificent view including looking into the reservoir for the Hotel Kosciusko water supply where fish abounded. Gordon did some fishing in the reservoir!

Part of the lease included the golf course for the Hotel and the sheep were handy for keeping the grass trimmed. The golf course was on the left side of the road opposite the Hotel. There was an old hut on the lease which was superceded by a new one built for Bill in a small natural clearing amongst the trees. That is the one I remember. The hut was not taken by the SMA but was removed at the end of the snow lease and re erected at Ted Bottom's place and used as a shearer's hut. It's still there."