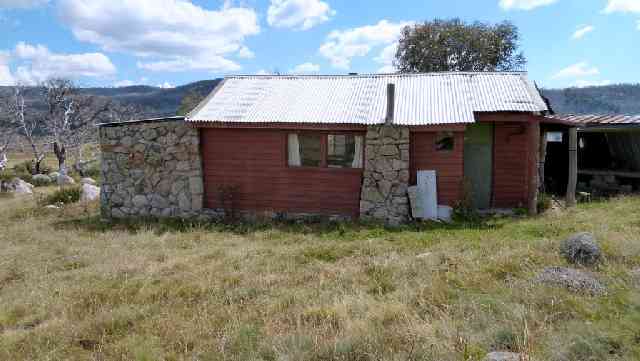 Located near Bulls Peak Ck on Snowy Plains just off the road to Bulls Peak Lodge. This entry used to be labelled Grundsen's old hut

This has been there since 1979 and is located close to where Rowe’s Hut (ruin) is shown on the Jagungal sketch map. It’s further north however.

Note that various spellings of Grunnsund have been used over time but the one above is correct. The hut has a sign “Katingal” above the door with Kore + Eva Grunnsund marked next to it.

Bryan Haig and Kore Grunnsund had first co-operated with building Nordheim Lodge in 1976-77 but they fell out. Then Nordheim burnt down in Feb 1979.

So Haig built Bogong to the north GPS UTM 631304 5998596 and Kore Grunnsund built Katingal close by. All these locations were on the ridge just east of Cesjacks. Katingal’s original location was GPS UTM 631257 5998552. It was first built in 1978 and then Kore Grunnsund became further disillusioned with Bryan Haig the owner of Bogong.

So he bought some land to the east down in the valley from the Flanagans in 1979 and moved his hut down there where it remains. The land is Portion 37 Parish of Gungarlin and of some 248 acres. He may have owned the other portions to his east and south.

The hut was chain sawed in two, including through the intact roof, and brought to the site in two separate pieces on an old army truck. It is now a rebuilt timber hut with stone masonry around the base and a bedroom added later at the back. There was also a caravan with annex and old shed which housed the tank servicing the hut and also included an accommodation room with double bunks, but these were burnt during the 2003 fires. These have been replaced with a modern green metal shed 50m to the east.

Photo of Katingal from the east side

An email from Bryan Haig in Nov 2010 states “Grunnsund sold his block to a group of Melbourne skiers a long time ago. He was not popular with the graziers and one day they burnt his land cruiser, and I don't think he has been seen up there since He may have gone back to Norway, although his wife's family live (or lived) in Canberra”.

Kore sold his properties in the 1992, portion 37 going to Stuart McDougall, John Morell and partners and portion 38 to the Cooma Ski Club group. Kore and Eva continued to come out to Snowy Plains for many years, always at Easter and many other weekends etc.

Photo of Katingal from the west

Kore and his wife Eva lived at Eucumbene Cove. After the sale of the Gungarlin property they soon also sold the Eucumbene property and bought a home in Cooma. There was a rumour they also moved to Coffs Harbour.

Kore was a commando in the Norwegian army in WWII and came out to Australia after the war working for a tunnelling company on the Snowy project. He later was a ranger, managed lodges in the ski fields and shared the building of Nordheim with Bryan Haig before building Katingal and then moving it down to the Bulls Pk river area.

He was a member of the Cooma Ski club and competed in some of the old Balmain cups. Whilst at Bulls Peak he ran a large lodge at Eucumbene. Apparently he inherited some property in Norway and moved back there in about 2006’s. He was also not well and thought he would be cared for better by the Norwegian health system.

Picture of Kore in the NAA records