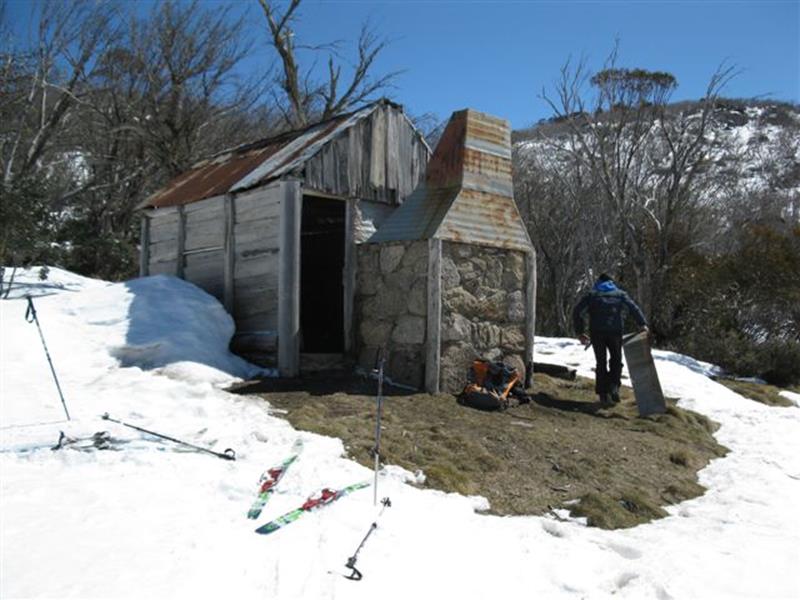 Located about 10km up the Big Boggy River from Dead Horse Gap. There are two ways to get there, firstly by a long walk up the Big Boggy (mostly on horse pads), or only 5km, straight up the spur behind the Thredbo village turnoff, to an alpine plain, then over two hills (on a compass or GPS bearing) to the hut. It takes about 2.5 hours by this way, and the scrub is moderate, but largely cleared by the 2003 fires. Good navigation is essential by this route.

Teddy McGufficke together with Dave and Noel Pendergast started building this hut in late December 1948 for grazing and brumby running. They laid the mountain ash slabs lengthways to prevent gaps appearing as the timber dried.  A framework of snow gum was cut on site, they built the fireplace of stone and the chimney of corrugated iron, framed with timber - they had it built in a week. The corrugated iron was "found" in the bush, apparently dropped from a load for another job. The brumby trap nearby was built in 1930 and 1931 by Kerry Pearce and rebuilt in 1960. It remains visible, just, in the small clearing immediately above the hut.

This hut is one of four in the Park, that have a complete book written about them. The Teddys Book is written by Matthew Higgins.

Although classed as a ruin under the Management Plan, Teddys Hut never quite fell to its knees. The Illawarra Alpine Club (IAC) ensured it remained standing, even though an early 1980s photo shows long wooden props jammed against the roofline, supported with fencing wire jury-rigged to surrounding snow gums. The hut stayed drunkenly upright, until tender loving care, as much as could be under the conservation charter at that time, was lavished upon it by the IAC.

In 2003 Teddys Hut avoided damage in the raging bush fire which led to the destruction of other shelter huts in the Kosciusko National Park. Revision of the guidelines for conservation allowed the Park Management to replace the two missing walls on Teddys Hut to ensure a warm shelter for walkers/skiers in that area. This plan was brought forward by a strong windstorm that took the roof off and Park tradesmen Uwe Pederssen and the grandson of Teddy McGufficke, Mick Filtniss, restored the old hut using old black and white photographs as a guide.

They rebuilt the chimney from stone scavenged from all over the hillside, and slid this stone to the site on a sheet of galvanised iron, resulting in a relatively snug, apart from some small gaps in the slabs, and weatherproof shelter that revives the romance of the summer grazing and brumby running days of the High Country above Thredbo.

This hut now stands strongly and is about 2.8m by 4m.

Simple in style and structure the hut had an earthen floor. There was no window and the door was simply a weighted chaff bag that replaced the tent tarpaulin that had initially covered the opening, protecting the floor from rain and snow. This original covering had lasted until the stockmens dogs wrecked it while pursuing rats which had invaded the hut!

The walls were originally slabs, lined with an old tent that had previously been used by the stockmen.  The floor was dirt and the chimney of stone. The shelter has remained with an iron roof. In 2005, NPWS staff rebuilt one wall and shored up the fireplace to make this hut more weatherproof. This is particularly welcome. Following publication of the Kosciuszko Plan of Management in 2007, the walls of the hut were replaced so that it can remain both water tight and remain standing.