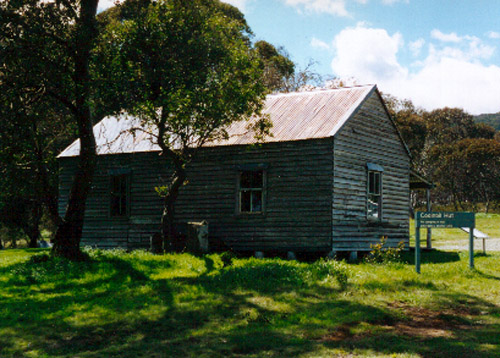 Located on the east side of Long Plain towards the Peppercorn (north) end, and accessible from the Snowy Highway at Rules Point, or down the Broken Cart Trail in summer.

This is one of five huts in KNP for which there is a full book written (and more to come).(The others are Daveys, Currango, Teddies and Old Currango).

The original building was built on this site in 1866.

This building replaced it in 1905, when the lease was held by A.B. Triggs. It was later taken over by Cooinbil Pty Ltd, a Riverina Property. Campbell was a major shareholder.

In 1987 a large limb from the nearby tree fell and crushed half the building. NPWS gratefully allowed restoration of the main building and the kitchen at the rear. KHA members put in many hours of work on this restoration.

In the 1990s, the boggy road was graveled, making the building more accessible to regular vehicles and it suffered more vandalism from graffiti. The site is also regularly used by horse riders and groups, who appear to keep it in good order.

The site is a good place to camp.

The building is a two room weatherboard cottage, with unusual cypress pine linings. The chimney is double brick. The roof is corrugated iron as is the separate kitchen area. There are shuttered windows and a NPWS standard toilet nearby.