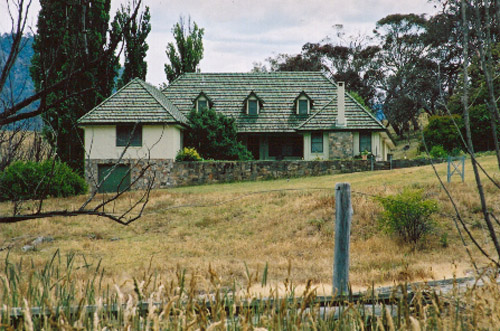 Located in the Namadgi National Park, about 1km from the Canberra to Adaminaby Road, connected by its own access, near the bridge and intersection with the old Boboyan Rd. Shown on the Rendezvous Ck 1:25,000 map.

Gudgenby is the second major homestead in this area, and is a substantial two story building, in excellent condition. It was built by Bill Bootes in 1964 for grazing. The Bootes were absentee landowners, and stayed in the cottage until this house was built. The lease expired in 1989, when it was resumed by the National Park.

This is the second building on the site, replacing the original slab homestead, built here in the 1840's.

The Henshaw family has had a long term sub-lease on the property since 1971, but not occupied the building over the last few years. Currently it is used by NNP Rangers and researchers on particular projects. The house is not open to the public.

One research project based out of this site was a study of the Population Dynamics of Eastern Grey Kangaroos in Temperate Grasslands undertaken by Don Fletcher of the University of Canberra.

Large, two story brick, stone and tile. Includes a number of sheds. Is located about 300m from Gudgenby Cottage.

The photograph above was taken in January 2002, and that below many years earlier, for comparison.