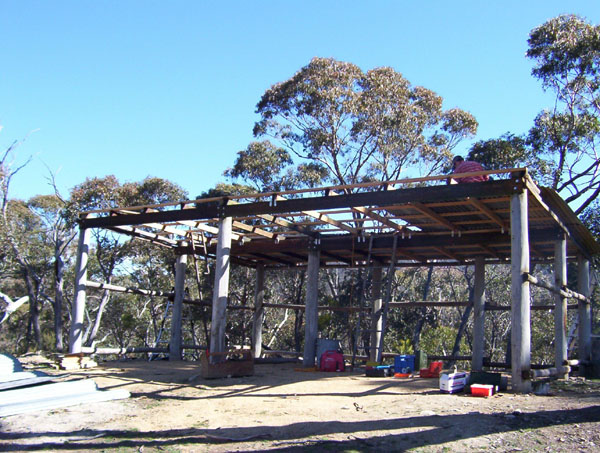 Hidden on a hill, about 1.5kmn behind the NPWS Glendale Depot.

The hut was rebuilt in 2002, using the materials from the original shed beside the Foresters Hut. That shed was removed in 2001. The new Glendale shed is the same design and demensions of the original shed, but in a much better position. It is used largely as storage for valuable building materials, for KHA, including shingles, slabs, iron, stove components etc.

The original frame was built with the welcome assistance of National Parks officers, Dave Dwyer and Jim. It uses original rails, plus powerpoles left over from their clearance from Namadgi. The iron is original, but more modern fastenings have been used throughout. There is no floor, but gravel has been laid, to keep the interior well drained. Eventually a fireplace and water tank will be included.

Completion was achieved in November 2002.