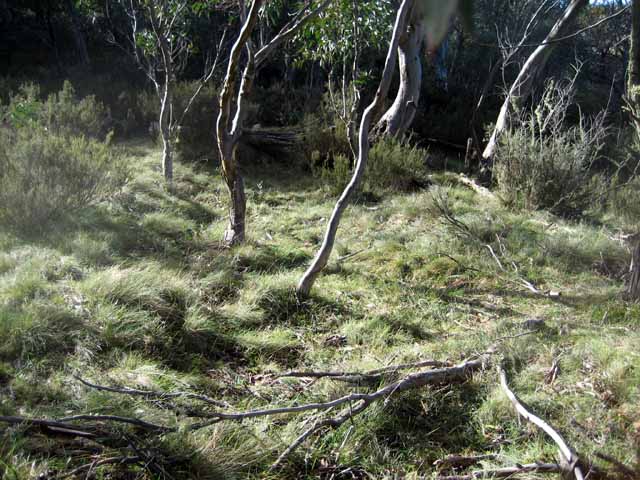 The site is also shown on the old Berridale 1:100,000 Ed1 map. It’s shown as old GR 353043. It’s located in the upper north west of the Gungarlin Valley just south of Crooks racecourse and just east of the Munyang Range and KNP boundary. The hut site runs NE-SW with the chimney in the NE end. It’s quite large being around 10m x 4m.

It may possibly be associated with M McGregor, who mined the adjoining area on Macgregors Ck in the 1890s. This creek is just over the western ridge which is the border of KNP and also the alignment of the Great Dividing Range.

Just below the hut site there is a water race that obviously starts in the creek about 300-400 m east of the hut site. The race tracks around to the south west to a swampy area then turns more south before reaching another creek. Both creeks are tributaries of the Gungarlin River. In this new creek which forms the anchor point of the valley below the hut site, there are some diggings, but around 70m upstream from where the race joins the creek. The diggings are not extensive but clearly were worked at some stage.

Information about this site’s existence was provided by Graham Scully in Nov 2009.