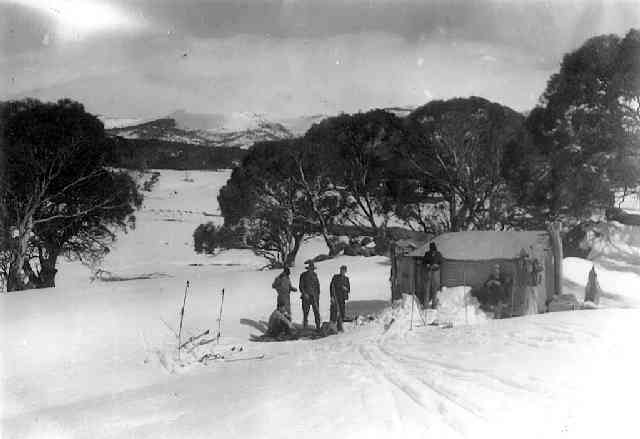 This is shown on the Jagungal sketch map as a ruin. The site is a small cleared area with a sign made by Max Rowe son of the builder Eddie Rowe and placed there by John Morrell. It is about 130m SW of the old Katingal Hut. The hut site, along with Katingal are on the same land as that owned by the owners of High Hut. There are no relics at this site.

It is close to the access road to Bulls Pk Lodge just south of Katingal.  It was built on a snow lease to graze sheep. Rowe gave up snow leases around 1951-52.

Information on Eddie Rowe and the pictures from Max Rowe (his son who now lives in Canberra).

Max wrote: “The photo of Eddie Rowe (my father) was one that I took while he was working as a station hand for Jeff Carpenter at his property known as "Big Badja" about 15 miles from Numeralla.

He was a great rabbit trapper, he always had feed for his sheep dogs and he sold the skins. He later trapped rabbits for meat and sold them in the skins. He would have rabbits for about a week in the winter and a semi trailer would call for them, pay cash, and take his rabbits and other trappers rabbits to Melbourne overnight, no refrigeration in the truck and plenty of dust.

The history of his hut is very brief however when he owned a small property at Rocky Plain near Eucumbene Dam , I remember that he seemed to be always applying for Snow Leases ,at Snowy Plain,. (I remember the red maps) he took his own sheep up there every year to graze and to allow his own property to recover its grass. While at Snowy Plain he also worked as a Shepherd looking after other peoples sheep. Hence the need for a hut.

While at a school reunion at Berridale an elderly lady approached me with 2 very small 3" x 2" photos (I can't recall her name) and I had them copied.I believe that they were taken around 1945 because some people in the photo were wearing WW2 army coats. I remember being in the hut around 1949.

It was about 10" x 12" and had a dirt floor a rough fireplace an old iron double bed, a timber table and a hole cut in the tin side for a window, I remember him cutting out the window with his axe.

When he travelled to Snowy Plain in the late 1940s I remember that he would always have a pack horse to carry his bread, tinned jam, tea ,sugar and some meat and a few tins of tinned meat. When I went with him it was in his sulky. Four wheel drives did not exist however After WW2 some people bought ex-army jeeps and blitz waggon trucks.

Eddie Rowe c1965
Apparently "Rowes Hut" was destroyed by a very heavy snow fall in 1964. The outline of the site is near the rabbit warren just below Katingal Hut.

I also remember that he made his own skis by cutting and splitting mountain ash and nailing a strip of leather to them as boot holders, no safety bindings in those days. Apparently he did not own stocks but used an old broom to slow himself down when skiing downhill.

Unfortunately I do not know who took the photos and I can't recognise any faces.”

The hut was about 10" x 12" with galvanised iron walls and a flat tin roof and had a dirt floor a rough fireplace an old iron double bed, a timber table and a hole cut in the tin side for a window.