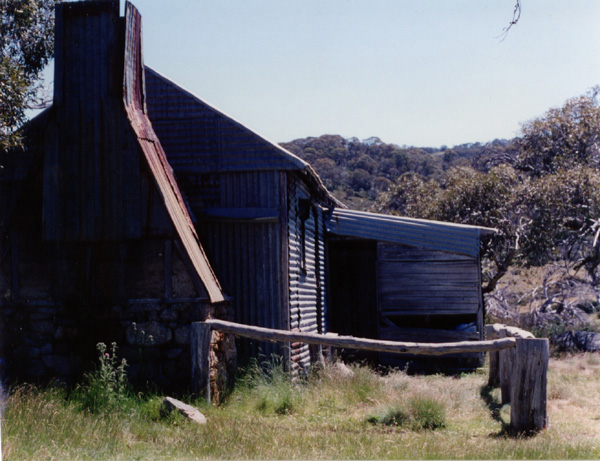 The hut is located on portion 35 Gungarlin, 320 acres selected by GJ Smithers in 1914.Sometime after 1931, HO Turner and Henry Flanagan acquired portion 35, and had Ron and Dave Jones build the existing hut soon after. Henry passed away in the late 1970's.The hut was used as a location for grazing activity through the mid to late 20th century.

By the early 1980s Bryan Haig (of Bogong Lodge) had acquired the property, which was transferred to Ian Gillespie-Jones in 1984.

There is a 4WD going north of the lodge and up and old spur to the park boundary whence it turns into short walking track which then eventually climbs straight up onto the Cesjacks Ridge coming out close to a Large Cairn on a Rock. This is close to an old bridle trail that stockmen used in past years. Gillespie-Jones calls this route the “Wombat Track”. Most of the people with huts along the Bulls Peak Creek use this route to go cross country skiing on the main range.

Ian Gillespie-Jones built a small wooden footbridge across Bulls Peak Ck below Flanagans near where a side creek joins Bulls Pk Ck. This has been replaced and upgraded by the Tin Hut people. Its at GPS UTM 632698 5997015.

An iron hut of three rooms, built over sawn timber frame, and is on the edge of the same property as Bulls Peak Lodge.