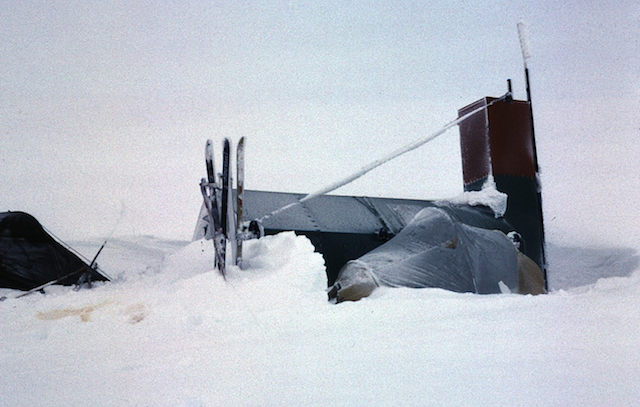 A whiteout is an occupational hazard for ski tourers on the Main Range. While low cloud and reduced visibility may occur at any time of the year, it is during winter with a blanket of freshly fallen snow covering the mountains, that the true whiteout is experienced.

My first experience with a serious whiteout was in 1984. After leaving Seamans Hut, our party of four skied across to the saddle above Lake Albina. Leaving our packs we set off for Mount Kosciuszko, a distance of 2.5 km. Traversing across the slope beneath Muellers Peak we reached Muellers Pass where visibility was reasonable and the summit of Kosciuszko beckoned us on over the 200 m climb.

On reaching the summit cairn the obligatory photos were taken together with the awakening realisation that dense cloud was rapidly covering the summit. With visibility quickly decreasing we set off with some urgency on the return journey to our waiting packs. Shortly after commencing the downwards journey the visibility reduced to zero with snow and cloud merging with the lack of contrast compounded by a total lack of wind which turned our surroundings into a deathly quiet, still, featureless world. Skiing downhill on the ridge line provided a unique experience when at one point I thought I was moving when in fact stationary; there was nothing against which to provide a relative measure of movement either up or down hill. At one point I skied over an unseen drop. The feeling of weightlessness while airborne was euphoric and luckily, after a short flight, the landing was cushioned by soft snow.

As the ski tracks from our ascent were not visible we had to rely on a compass bearing. With no accurate idea of our location relative to our packs we tried to maintain the bearing to avoid drifting to the left into the Wilkinson Valley or right off a cornice on the lee side of ridge. Our progress was slow and while no-one raised the issue there was a feeling of increasing unease as we needed to locate our packs or would be facing an overnight bivouac without the comfort of our tents and sleeping bags.

Around 16.00 we thought we could see a vague grey apparition to our right, the first point of contrasting colour we had seen in our agonisingly slow descent. Skiing across to the object, expecting it to be a granite boulder, we saw it was manmade. Although we had not seen it before we quickly realised that it was the temporary emergency shelter erected after the demolition of Lake Albina Lodge. Finally knowing our location we quickly took a compass bearing from our map and followed it south to the saddle to recover our packs from their lonely vigil.

As the inside of the shelter looked like a freezer badly in need of defrosting we chose to put up our tents as it would be warmer and not nearly as claustrophobic. The visibility had improved a little but there was still no wind to test the snow pegs anchoring the tents.

In hindsight we had maintained our compass bearing surprisingly accurately but with no height benchmark we had skied above the saddle before continuing on a slow fall line towards Lake Albina.

While we have since experienced whiteouts and high winds on exposed areas such as the Kerries and the Rolling Grounds, our 'best' experience, perhaps appropriately, has been on Australia's highest peak, Mount Kosciuszko, accompanied by a stay at the temporary Lake Albina survival hut.