Cows up in the Trees – First Graziers at Kiandra

From a paper given at the Australian Historical Association conference in Canberra, July 2018

25th July 2019 marks 185 years since the Irish convict Patrick Whelan perished in a blizzard upon the Kiandra Plains.

Whelan was tending the horned cattle of Dr Andrew Gibson on Long Plain. Most of Gibson’s cattle, along with those of George Thomas Palmer at Cooleman and William Pitt Faithfull at Nungar, all perished. So ended the first attempt by Europeans to occupy the Snowy Mountains.

Gibson had retired from being the Assistant Colonial Surgeon and family physician of Governor Ralph Darling to become a grazier. Marrying Alice Faithfull in 1827, he settled the following year at Tirranna south of Goulburn. His brother-in-law, William Pitt Faithfull, took up a nearby  grant upon which he established Springfield.

George Thomas Palmer is better-known for establishing the Ginninderry estate in Belconnen.This, along with Jerrabomberra near Queanbeyan inherited from his father, were managed by overseers whilst Palmer resided at Parramatta.

By 1833, squatters were pushing south and west through the Monaro establishing illegal runs ‘beyond the limits of occupation’ — to which the government of the day turned a blind eye.Palmer established a run at Bolero north of Adaminaby, Faithfull at Yuquimbiang (Eucumbene) now beneath the reservoir, with Joseph Slack nearby at Yaouk.

From autumn to spring of 1833, surveyor Granville Stapylton traced the Tumut and Goodradigbee Rivers upstream from their junction with the Murrumbidgee. On the Tumut survey he explored up the Yarrangobilly River to within 5km of the plains. Later on the Goodradigbee, difficult terrain upstream of Brindabella caused him to climb the ridge to the west, where he stumbled upon Cooleman Plain. Soon after he stood upon the summit of Mt Morgan, recording the broad extent of the Kiandra Plains all the way south to Mt Tabletop.

Stapylton returned to Sydney via the Limestone Plains, Yass and Goulburn, reporting his discoveries at the homesteads he passed through on his way. Stapylton is the first recorded European to visit the Kiandra Plains, albeit there is a slight chance that stockmen from the adjoining districts may have ventured there, led by an Aboriginal guide, in the previous 2-3 years.

Within 3-4 months, Gibson, Faithfull and Palmer had moved the first mobs of cattle up onto the Kiandra Plains. Gibson and Faithfull were collaborating in a family enterprise; Palmer’s presence appears coincidental. Gibson and Palmer took their cattle via Urayarra across the ranges into Brindabella valley, then up a spur to Peppercorn on the northern edge of the plains.

Considering the ruggedness of the terrain along this route and the use of Aboriginal guides along the same route by Terence Murray of Yarralumla in 1839, it is likely the marked line of trees established by Gibson and Palmer followed a traditional Aboriginal pathway and they were guided by members of the local Ngunnawal community. Palmer erected yards on Cooleman Plain, the posts of which were still evident when visited by the John Gale in 1875. Gibson erected a hut and yards on Gibsons Plain just north of the later Kiandra township, these and a hut on Nungar — possibly Faithfull’s —were visited by Stewart Ryrie in 1840. Gibson also erected a hut midway along Long Plain, and possibly huts and yards at The Gulf (adjacent Tantangara Dam).

The cattle remained on the plains through the winter of 1834. Around 25 July a series of snowstorms commenced. Snow fell for three weeks, blanketing the mountains and extending across most of the Monaro. Gibson and Palmer — occupying the highest areas — lost several hundred cattle each, Faithfull a ‘lesser number’.

Those cattle that survived the initial onslaught of blizzards sought shelter and feed amidst the canopies of snowgums, the only vegetation to be seen protruding above a frozen sea of brilliant white. Here they perished from starvation and the effects of exposure, their fallen bodies becoming cradled by the upper branches as the snow melted away in the spring. Twenty-six years later, at the time of the Kiandra goldrush, the carcasses of these cattle were still evident high in the trees, and widely cited as an omen to those miners considering staying on the diggings through the winter.

Stockmen in Palmer’s huts escaped into the Brindabella valley, and were assisted by the local Ngunnawal in returning back to Ginninderry. Another group under the overseer Bill Ward was reportedly trapped in a hut under 10m of snow for a week before being rescued by ‘Yiak Bill’.

Patrick Whelan was based at a hut and yards in the vicinity of the location marked on old maps as ‘Starvation Point’. The origin of this name was previously unclear, but now appears to be based upon the stock losses of 1834. Whelan reportedly set out from the hut in search of some bullocks that had strayed and was not seen again. In 1839, a party led by Terence Murray came across Whelan’s remains on Long plain and buried them at the site. Patrick Whelan had been a trusted servant of Gibson — who had put Whelan’s name forward to receive a ticket of leave in October 1833. The wheels of bureaucracy moving slowly, Governor Richard Burke signed Whelan’s Ticket of Leave on 26 July 1834, the day after his death on the Kiandra Plains.

Map of the Kiandra Plains

Link to larger version of the map 0.54MB 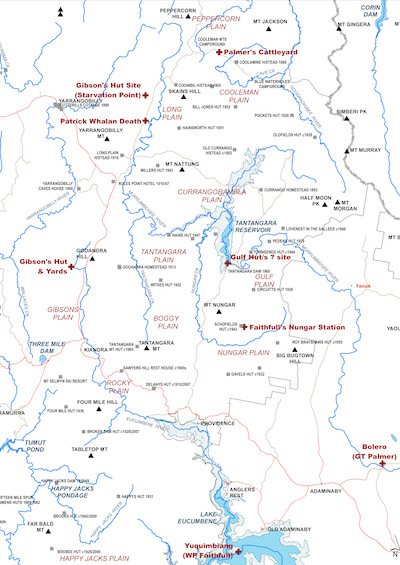