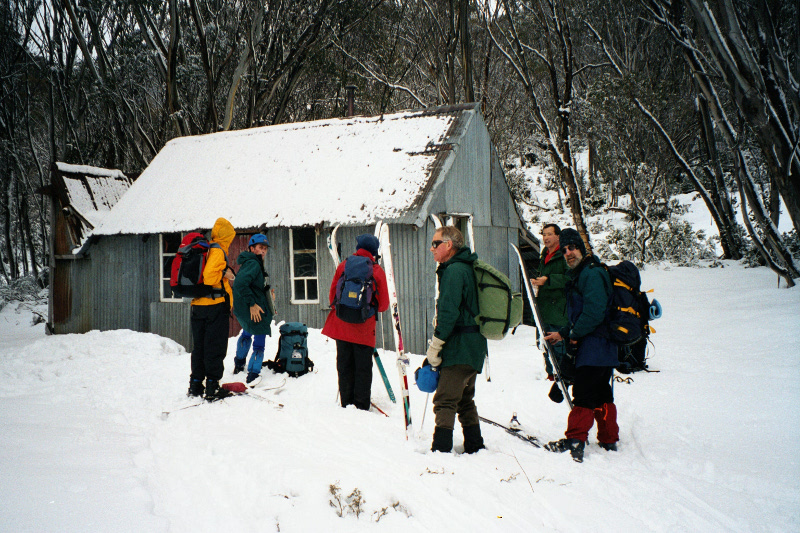 Horse Camp Hut is believed to have been constructed within the period 1933-39 as a shelter for stockmen working the Clarke brothers’ snowlease. The hut was modified by the Snowy Mountains Authority c1949-51, as a base for horseback mounted teams undertaking survey work on the first capital project of the Snowy Mountains Scheme — the Guthega dam, aqueducts and power station.

The ranges around the Whites or Munyang River were first grazed in the mid-late 19th century. It was part of the Murryang or Munyang squatting run, which extended along the main range from south of the Bulls Peaks to Mt Kosciuszko. Stock were brought from Snowy Plain over Brassy Gap into the Burrungubugge valley, then pushed out onto the alpine pastures of the main range from November through to April.

The Clarkes had built Whites River Hut on the same lease in 1934-5, and grazed stock here during the summer months from 1929 until 1950, when Adams, Mackay and Weston took over the lease until 1953 — when it was terminated due to work on the Guthega projects.

The Snowy Mountains Scheme commenced in 1949. Surveying of the site for the Guthega projects had to be on horseback as the road to Guthega had not been constructed and offroad vehicles were in short supply. The clear flats at Horse Camp provided a sheltered base for early survey and hydrological work in the Snowy River Valley and the upper tributaries of the Geehi. From 1953 the hut appears to have served as a shelter for construction and maintenance of the Munyang River aqueduct.

Shepherd camps are recorded in the vicinity of Dicky Cooper Creek during the 1870s, with stock being brought into the area via Snowy Plain. This route was also travelled by early trekkers riding to ‘the summit’ via the Rolling Ground – Tate – Twynam – Carruthers peaks.

In 1910 AJ Litchfield acquired snow lease 79 over the 3680 acres between Guthega Ck and the Whites/Munyang River. The creek at Horse Camp formed the northern boundary of this lease, beyond it snow lease 78 extended to Schlink Pass, owner unrecorded, prior to being reserved from sale in 1914.

In 1927 the main range area south of Schlink Pass and west of Whites/Munyang River was proclaimed a bird and animal sanctuary.

In 1929 snow leases 78 & 79 were combined into a new Block L1, initially acquired by FP (Felix?) Kirby, transferring to Hazeldean Ltd (Litchfield) in 1930, and the Clarke Brothers (‘Executors of S Clarke’) in 1933. Edward Haslington and the Clarkes are reported to have jointly run sheep across several leases in this area whilst Fred Clarke and Bill Napthali built Whites River Hut on the north end of the Clarke’s lease in 1934-5. The main grazing area was likely above the treeline, although some clearing of the valley around Horse Camp may have occurred to provide a sheltered pasture for bad weather. Stock access into the Horse Camp area would have been down the spur from the Rolling Ground, as the valley of Whites/Munyang River near its junction with the Snowy was impassable.

Horse Camp Hut has a mixed origin associated with grazing and the Snowy Mountains Scheme, but details are unclear. David Jardine’s grandfather was reportedly working out of Horse Camp Hut during the 1930s, and the current envelope is believed to date from this decade. The tar paper lining beneath the iron cladding was widely used on huts during the 1930s including the other hut on the Clarke’s lease — Whites River — and Oldfields Hut. The traditional bush pole frame, steep pitched gable roof and cladding of short sheets of corrugated iron brought in on pack horse, conform with an interwar pastoral origin albeit this construction type was in use from the 1870s to 1970s. The building shape suggests the fireplace was initially full width across the hut; whilst the raised timber floor suggests the original floor was earth.

A fenced paddock in front of the current hut was still referred to as ‘the rams paddock’ through the 1950s, when the SMA was using it for their horses. A small set of yards was still visible 100m south of the hut in 1968.

In 1949 the Snowy Mountains Authority started survey work in the area on the Snowy Mountains Scheme and specifically the first project — the Guthega Power Station. In the early years of the scheme the SMA operated up to 75 horses in surveying and works; Horse Camp appears to have been an important early base for surveying and the hut draws its name from this period. Prior to the road being constructed in to Island Bend and Guthega Dam, survey teams on horseback were mapping the Snowy River and its tributaries including Whites/Munyang River.

The original hut at Horse Camp is believed to have been taken over and progressively altered from 1949 as a base for SMA survey teams. Potentially the original hut was dismantled and replaced with the current building at this time, however the mix of bush timbers, sawn timbers and manufactured boards suggest alterations over a decade or two. These alterations included partitioning the hut into two rooms — with a pair of bunks and pot belly stove installed in the northern bunkroom, reconfiguring the fireplace to form two bays, adding a ceiling to create a sleeping or storage loft, adding a raised floor — necessitating the door be rehung to be outward-opening, and lining the walls with caneite. The tall, narrow windows that are a distinctive aspect of this hut were likely a c1950 change whilst the large window in the northern wall probably dates from sometime later.

The hut was also likely used as a base for surveying the upper Geehi and Valentine catchments, including the site of the proposed Windy Creek Reservoir above Leaning Rock Falls and associated aqueducts. Survey work in this area wound up after a few years however the hut remained in use as a shelter through construction of the Munyang Aqueduct 1953-56 and subsequence maintenance of the aqueduct.

Through the 1960s the hut was used increasingly by bushwalkers. In 1968 the Sydney Grammar School (SGS) Endeavour Club adopted ‘caretakership’ of the hut and soon after undertook a number of repairs. These included building a new chinmey for the stove, repairing the fireplace, doors and windows, levelled and fixed the floor, stocked the hut with tools and furniture. A pit toilet was added around this time.

The plywood-floored sleeping loft may have been added by SGS. It was still in use through the 1980s, but was subsequently sealed shut for safety reasons with the wall ladder being removed.

Situated within the popular Whites River Corridor, the hut receives heavy use from walkers, cyclists and skiers, particularly groups undertaking their first trips onto the main range. Suffering from natural decay and use, it was substantially rebuilt by the NPWS in 2016 to ensure its life into the future.

The Munyang Aqueduct trail from the Surge Tank above Guthega Power Station to the Schlink Pass Road below Whites River Hut is a more pleasant, but longer, walking and skiing route than the road. The route is marked by vent pipes omitting watery noises; most weirs except or the main one on the River itself are upstream and out of site of the track.

The horse and rams paddock is still evident as a clearing across the access track from the road 100m east of the hut.

Toileting – pump out toilet outhouse to north of hut.

Firewood – plentiful within treeline to north and west.

Nearest Phone Reception Point in an Emergency – outside front of hut (??)