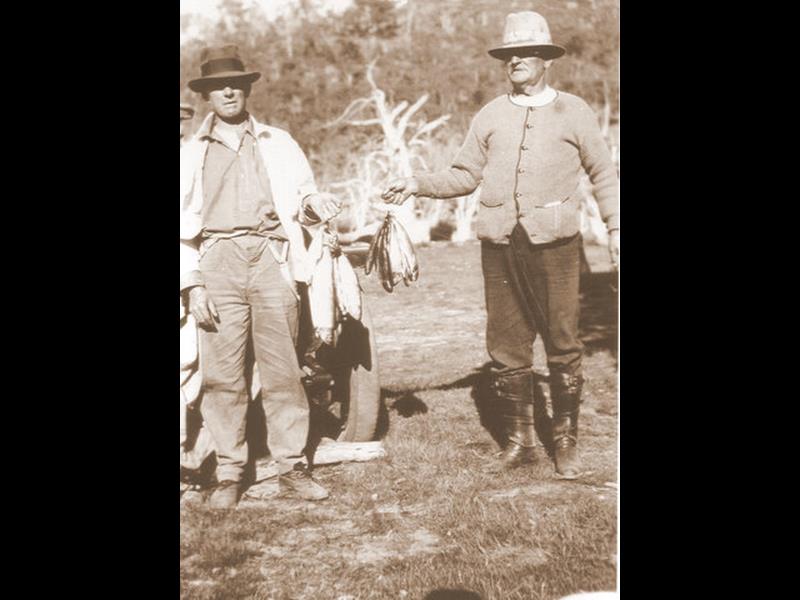 Jack was born in 1911 at Cavey St, Marrickville his parents being Charles and Ida (formerly Molyneux).   Before Jack started school they moved to Goulburn whence Ida had come and where her mother, four sisters and one brothers were still living.

He left school about 1931 and commenced Pharmacy about 1932, working at Murray’s Pharmacy, Parramatta Rd, Annandale and boarding at Stanmore.  He was badly injured playing Rugby at St Luke’s Oval on 25 Apr 1934, suffering a fractured skull.  He returned to 84 Bourke St for a long convalescence.  At the time Pop owned the Goulburn Racecourse and eventually Jack was able to grow a few peas there and run a few sheep.  He also looked after the trotting track using cinders from the stacks from the steam trains at the railway.  Pop bought “Riversdale” on Pomeroy Rd for Jack in 1938.

Pop was always a bookmaker, first at small country towns, where sometimes Gran and Jack used to travel with him by car down the South Coast.  Pop used to field right out west.  He later was a paddock bookmaker at both Flemington and Randwick.

Pop always loved fishing and indulged whenever the opportunity arose.  After a boating accident in the deep sea he abandoned the coastal waters for the Burrinjuck and then stream fishing.

While stream fishing in the thirties, Pop began a life-long friendship with Tom and Molly Taylor, often staying with them at Currango.  It would have been through Tom that he heard of the availability of the snow leases in the Snowy National Park.  He, C.W.Townsend and Jack, C.J., obtained adjoining leases and at first had the use of a hut (possibly Peden’s) but quite early on, Pop had Bill Smith, an ex-jockey, build Townsend’s Hut.  He was helped by Peter Hadfield who did a lot of work at both Riversdale and the leases.  Sheep yards also had to be erected some distance directly up the hill from the hut.  Jack was well and truly involved in this hugh task.  It involved felling trees with only an axe for the posts, rails and gates for the different holding yards and the race.

The stock – huge merino wethers – were bought in the far west in the spring.  They were trucked in, fattened and sold in the yards in splendid condition when the time came for the leases to be vacated before the winter.  Mustering was a mammoth task.  One April there were three snow falls and sheep don’t like travelling in the snow.  In 1948 the entire flock was driven over miles of stock routes to Marulan for agistment.  They were shorn there and taken back to the mountains for the spring and summer months.  Jack was always part of the droving teams both coming and going, fitting in the Randwick races between times to help his Dad wearing the bookies’ bag, taking cashfor the bets and paying out.  There were a lot of  Randwick races as  Warwick Farm meetings were transferred to Randwick during the war, Warwick Farm being  requisitioned by the military...

We were married on 26 Feb 1949 and I spent about ten days in the hut in March of that year.  It was all an eye-opener to me.  We travelled by ute and had to stop several times on Bug Town Hill for Jack to cut down trees before we could proceed.

Pop and Peter Hadfield were already in residence when we arrived towards evening.  The hut was quite substantial as huts go.  It was mainly built of fibro with a beaut fireplace – most appreciated in the cold mornings and evenings in the bracing mountain air.  The room Jack and I occupied was a lean-to on the southern side of the hut.  There was an outside toilet down the hill towards the river.  It had a door with binder twine for a latch, two sides and an ample bush for the third side.

All were up pre-dawn the next day to prepare for the job in hand, dosing the 5000 sheep.  We rode uphill each day to the yards.  My mount was Baldie, the quietest available.  Also in the party was a pack horse to carry the equipment, the drenching guns, drench etc and the tucker.  The workers were Pop, Jack and Peter with Tom Taylor riding across from Currango most days.  I tried to help but was of little use as I was frightened of the sheep – they were as big as fully grown calves.  While the work was going on there wasn’t much cooking done.  We relied mainly on what we took from Goulburn, especially bread and corned beef.  Pop also saw that potatoes were left on the coals during the day as a favourite saying of his was “You can’t have a meal without a spud.”

Everyone was dead tired by the time we returned to the hut in the dark.  Still the horses had to be unsaddled and fed, not to mention the faithful dogs, Tex and Folly.  They were brown kelpies and the best ever sheep dogs.  It was amazing to see them work.  They were always just where they were wanted – in the various yards and even running on top of the backs of the sheep in the race.  The job took about four or five days but it started to rain the night before we were to leave and the Bidgee came down delaying our departure for four more days.  It was a new experience for me trying to cook on the open fire.  The main ingredients were fish (in abundance) and duck for a change.  We had milk as there was an open air cow bail close by the hut with a small pen attached for shutting up the calf overnight, should milk be required.  The horse yards were quite adequate.  Pop was a dab hand at a damper.  We carried the butter with us and there was no need for a refrigerator.  Jack used to have a dip in a small creek, in freezing water, just to the north side of the hut.  I made do with a bird bath.  I washed my hair once in the crystal clear water but it was so hard my hair ended up like fine wire.  We left just in time to make the Easter Carnival at Randwick.

Jack and Pop were up and down to the leases many times looking after the sheep.  Towards the end of 1951, Pop was there on his own fishing when he became ill.  On his return to Goulburn he was diagnosed with leukaemia.  The leases were surrendered in the early fifties.  Jack sometimes visited the mountains later camping and staying with Tom and Molly.  Phil and Vin went with him on one occasion.  I’d never been back until the New Year of 1987 when we stayed at a motel in Adaminaby.  Jack was not able to walk to the hut as he was quite sick but he was able to see it in the distance across the lower waters of Tantangara Dam  Much to his disappointment, the sheep yards were never found.