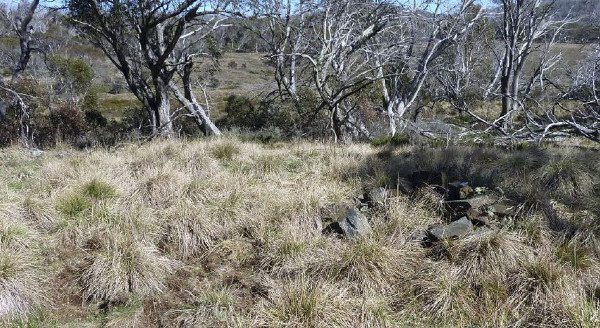 Glennie was a Scotsman who enjoyed the cool mountain weather, and resided in the hut for 45 years whilst working ground sluicing claims in the Four Mile Valley. He made a reasonable return and moved into Kiandra upon his retirement c1910. The hut became a ruin during the 1920s-30s.

The site is of an early gold miners hut built by William 'Bill' Glennie c1865, situated in open woodland on the east bank of Four Mile Creek ~540m south of Four Mile Hut. The hut was a single room, with walls of timber slabs and a bark roof. It is currently defined by a large pile of chimney stones and a rectangular grassy footprint. A large earth-walled dam, racelines and diggings associated with Glennie are located nearby.

William "Bill" Glennie was a Scotsman, born around c1829 (Ref 2). Tom Yan recalled Glennie disliked the general heat of Australia and was attracted to the cool climate of the mountains. (Ref 3) He might have spent time in Kiandra beforemoving out to the Four Mile, where he pegged his first claim about 1865. (Ref 4) Soon after he appears to have built a single-roomed hut, of timber slabs with a bark roof, (Ref 5) at the present site on the east bank of Four Mile Creek, Here he lived whilst ground sluicing the watercourses and banks of the valley over the next 45 years.

Unfortunately there is no record of where individual miners like Glennie worked within the Four Mile valley. The best indicator of the location of Glennie's workings is his hut site, which would have been situated on or adjacent to his initial claim. Hence the alluvial gold workings along the east bank from a point 100m southwest to 200m north of the hut are highly likely to have been worked by Glennie, although they could have also been worked in the rush of 1860 and/or subsequently worked by Bob Hughes during the 1930s.

60m northwest of Glennies Hut is a large holding dam, still evident today. This was fed from a race that can still be followed 1.8km, across into the adjoining Bloomfield Creek catchment and upstream to a point above the Elaine Mine. (Ref 6) The race was probably excavated by miners working Four Mile Creek around April 1860, and later diverted into a new dam by Glennie. Excluding the mid 1880s, when hydraulic sluicing was being undertaken at South Bloomfield and Four Mile valleys, this would have provided Glennie with a continuous and copious supply of water for his ground sluicing, and it's routing away from any other mining claims would have helped Glennie avoid disputes over water rights.

Beyond 1860, the Four Mile appears to have been generally worked by a handful claimants each year. During the late 1870s this included Glennie, Neil Taylor, William Wyeboe, George Cox, ? Venteman and ? Bowerbank. (Ref 7) Most of these claims were abandoned by 1880, (Ref 8) however a resurgence of activity was reported in the Mines Dept Annual Report of 1881 with the "principal claim-holders being Messrs Glennie, Sharp, Cox, Patterson, Powell, Patrick, Mullins, Boggertitch, Taylor, O'Brien, and Greenway . . Glennie has worked here for many years; therefore I presume he has good returns, otherwise he would have tried fresh ground . . Here also Mr John M Lett has pegged out two 10-acre blocks, and is constructing long races to work the above claims." (Ref 9)

The following year the Department reported: "Pattrick, Mullens, Bogertitch, Patterson, Cox, Powell and Glennie are still at work and getting payable gold. (Ref 10) Glennie appears to have continued to work his claim through the mid-1880s, when the valley was disturbed by hydraulic sluicing operations on the head of Four Mile Creek and at North and South Bloomfield. As for most parts of the Kiandra goldfield, there were disputes over water supply - in 1893 Taylor made an unsuccessful claim that Glennie had abandoned his head and tail races. (Ref 11)

Glennie is believed to have generally worked alone. Tom Yan states Glennie made a reasonable return, and bought a hotel in Kiandra at one stage. (Ref 12) An 1891 newspaper article portrayed Glennie in a romantic light: "a Scot of frugal mind intent, he is now in very comfortable circumstances, and has lived on through frost and snow ground-sluicing year after year, content with a good yield one season, and perhaps a meagre one the next, always putting by a muckle wee penny for the bad time that may come; so that, though he is now bidding fair for four score years of age, he is still a fine specimen of the vigorous, honest, healthy, and hearty old digger, one of a type now nearly extinct." (Ref 13)

The main track from Kiandra to the Nine Mile via Commissioners Gully passed close to Glennie's Hut, so it is likely visitors frequently dropped in. One report has a party of snoe-shoers calling in on their return from the Nine Mile: "A very severe snow storm accompanied by a dense fog, occurred here on Sunday last. Thirteen townspeople in all were lost. The early morning was clear, and a party, consisting of J Eastwood, junr, W Bourke, T Ottley, G Irwin and two lads, W and A Hetherington, started for the Nine Mile on shoes. The party started early in order to have the benefit of the hard frosty snow, and arrived at their destination in two hours and a half. Leaving again at 2 o'clock they called at Mr Glennie's Four Mile, and then decided on taking the table-land track.

"The fog was exceedingly dense, and after four hours hard travelling they had completely circled and were again on their own tracks. As it was now dark and snowing they decided on sliding on to a sheltered sidling. After much trouble a firewas made on the top of three feet of snow. The six then huddled round the fire to watch through the twelve hours. Sleet and snow fell continuously.

At 6.30 am, a fresh start was made for the tableland to await the clearing of the fog in order to take land marks. At 10.30 the fog slightly lifted, when the Eucumbene River was sighted. Points were taken and the party stubbornly shoed back round steep sidlings towards the town and arrived home at noon after being 22 hours continuously on shoes without food or extra clothing."(Ref 14)

Around 1910 (Ref 15) Glennie, aged 80, moved into Kiandra, occupying a two-bedroom house between the present locations of Wolgal Lodge and Jim & Fanny Pattinsons House. (Ref 16) In 1911 he joined the committee for the Kiandra School of Arts (Ref 17) and around this time befriended a young Bill Hughes, who lived in a house opposite and later described Glennie: "Bill liked his whisky and hearty roars could frequently be heard coming from his house late into the night. As he was perfectly normal during the day I have since come to the conclusion that it was just his way of voicing disapprobation to the world in general of the quirks of fate which had led him, a braw Scottish laddie, to such straits."(Ref 18)

Bill Hughes would bring food, and at one time when Glennie was received a bad foot infection, Bill came daily to re-bandage Glennie's feet, - but the cantankerous old man would tear the bandage off again as soon as Bill had gone out the door. (Ref 19) On the night of 1 February 1917 Glennie, aged 88 and probably in a state of intoxication, collapsed into his fireplace and died. Next morning Bill, aged 14, "found him lying in the fireplace with his head burnt off."(Ref 20)

Glennie was buried in the Kiandra Cemetery on 2 February 1917.(Ref 21)

Glennie's hut became a ruin sometime in the 1920s or early 1930s. It is possible Bob Hughes may have stayed in the hut whilst mining the valley and building the current Four Mile Hut. (Ref 22) The site of Glennies Hut is currently defined by a collapsed pile of fireplace/chimney stones, a level rectangular area defining the hut footprint, and some broken shovel heads. It is situated on the popular walking route from Four Mile to the Elaine Mine.

Trove - See links above in the timeline. Main website - http://trove.nla.gov.au/ndp/del/home

Pearson, Michael (NPWS) A report on the Mining History and Remains in the Northern Half of Kosciusko National Park, unpublished report 1979