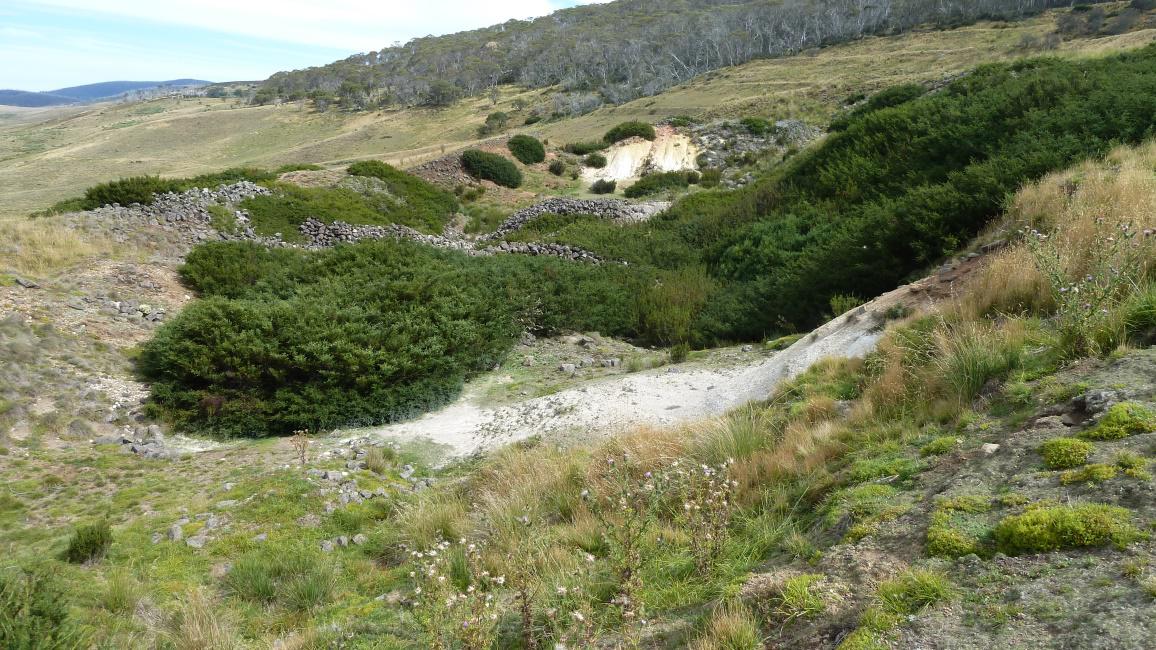 The site includes a race bringing water from 4 km up Racecourse Creek to two header dams above the workings. A number of building/structure sites are evident in the area, although it is difficult to separate the Luttrell sites from the Sand Mining sites without archaeological analysis.

The claim yielded ~14 oz of gold over the summer of 1890-91, however the total yield is unknown. Luttrell ceased operations by 1893, and the Giandarra Mine was established close by in 1894 to work the lead by tunnelling.

The watercourses of Gibsons Plain between New Chum Hill and Mt Gooandra are believed to have been first prospected and worked by miners during the summer and autumn of 1860 — the time of the Kiandra Goldrush.  Considering the rich finds on the southeast face of New Chum Hill during 1860, it is inconceivable that prospecting would not have occurred around the northern spur soon after.

There is no record of major workings on the northern spur prior to 1889, when Alfred Luttrell commenced ground sluicing work on his claim MT20.

Alfred Luttrell was described in his obituary as "one of the pioneers of the Kiandra goldfield".  He possibly arrived during the rush of 1860, although his first recorded presence at Kiandra is in 1862.  The following year he signed a petition of complaint regarding the inquiry into Gold Sub-commissioner Cooper.  Little is recorded of his life or mining work at Kiandra.

In October 1875 Luttrell acquired gold lease GL27, the first issued at Kiandra under the new Mining Act.  It was for a sluicing claim on New Chum Hill, which he appears to have worked with a team of 2-5 men until the lease was cancelled in 1878.

Other reports indicate Luttrell was still at work at New Chum Hill into the 1880s, possibly on a lease he had acquired from another party.  In 1879 he was residing in a house on New Chum Hill (location unrecorded) and featured in a widely published article describing the perilous journey of Thomas Bridle in carrying the mails to Kiandra from Lobbs Hole:

"On Wednesday, the 13th inst, I started from Mr Harris's place, about nine or ten miles from Kiandra, and two and a half miles down a mountain by the falls of the Tumut River.  . .  With a pair of snow shoes, a break stick, and two mailbags on my back, I trudged up the hill, the snow becoming deeper every few yards, and by the time I got to the top of the range that divides Tumut from the Monaro district, I was floundering along, sometimes up to my knees and at others to my armpits in the snow, which varied in depth from 3ft to 8ft  . .

"Having climbed the steep hill I put on my snow shoes . .  when all at once I fell through into a running creek about 6ft under the snow, breaking one of my snow shoes.  I scrambled and scraped my way to the top, and by looking at my watch ascertained that I had been travelling five hours, and had only accomplished four miles of my journey.  I had six more miles to go, and had only seven hours of daylight to do them in  . .

"I thought that by making for the river I would be able to proceed more quickly through the water.  On reaching the stream I got along very well for a few hundred yards though the water was covered with half thawed snow, and I could not see the bottom, but all at once I dropped into a hole up to my neck I got out, emptied my gum boots, and carefully felt my way along a little further, when the water became completely bridged over with snow, and I had to leave it and struggle through the snow  . .

"A freezing wind was blowing, the ice hanging to my clothes and whiskers made me heavy, and I became exhausted and could not make sufficient exertion to keep myself warm  . .  my only idea, was, that when I could get no further I would, burrow a hole under the snow to get out of the frosty wind.

"However, by getting on two or three yards at a spell, I managed to reach Mr Alfred Luttrell's place about a mile from Kiandra, and he did all in his power to relieve me.  I could not get my socks off without his assistance, and he got a bucket of ice and water to bathe my feet with and prevent their being frost-bitten.  He certainly saved my life, as he has done the lives of several others.  I was13½ hours in the snow, and two men perished in the same place within the last few years."

By the late 1880s, Luttrell had shifted his operations northward to the present site above Racecourse Creek.  At this part of the ridge, the gold-bearing gravels of the Kiandra Lead were exposed or close to the surface, where they could easily be removed by shallow surface excavation.

In 1889, certainly prior to March 1890, Luttrell applied for a lease of Mining Tenement MT20 at the present site for the purposes of ground sluicing.

The survey plan for MT20 was not completed until April 1890.  However in November 1889 Luttrell was reported as preparing to wash up ore from the ground he had been sluicing since the autumn, and it was reported "this claim, when properly opened, ought to employ a great, many hands".  Was Luttrell working MT20 at this time?  The text suggests he was working on a new enterprise rather than his old claim on New Chum Hill, so it appears likely he had been working MT20 from ~April 1889.  From the extent of workings Luttrell probably had a team of 3-5 men.  Despite the above report, no returns are recorded that year for Luttrell in the Mines Dept annual report.

Luttrell appears to have continued to sluice the site through 1890 and the summer of 1890-91.  However the Lead dips into the hill at an angle of ~20º and Luttrell soon reached a depth where he could no longer flush ore out into his tailrace.  By the autumn of 1891 Luttrell was considering tunnelling under his sluice workings to reach the Lead, and following a visit of the Mines Dept Surveyor William Anderson he received a grant of 4 shillings per foot of 'prospecting aid' to excavate a tunnel 46m (150’).

Luttrell worked the claim for 14 weeks over the summer of 1891-92 for a return of 14 ozs of gold, the only recorded return from this site.

Luttrell appears to have ceased work on his claim in late 1892 or 1893. Possibly he sold the claim to John Robyns, who commenced tunnelling into the hillside beside the claim in 1894 — refer Giandarra Mine.

By late 1893 Luttrell had acquired a 10 acre sluicing lease at an unrecorded location with John or Frank Lette.  In October of that year they attempted to sue Wesselman and Blake for trespass — having tried to peg out part of Luttrell and Lette’s claim as a new lease.  The case against Blake was dismissed, but Wesselman was ordered to pay 10s damages.

Alfred Luttrell remained at Kiandra until his death there on Saturday 22 September 1906, aged 78.  He was interred in the Kiandra Cemetery the following day.