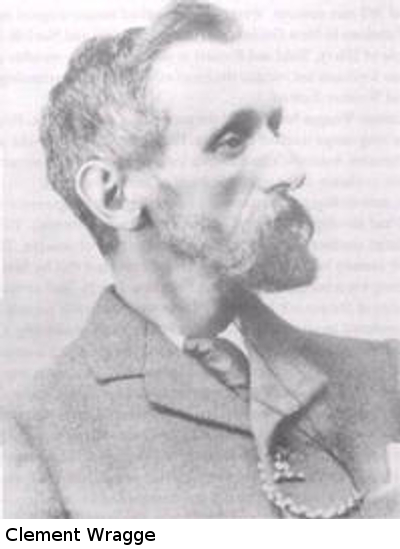 Clement Wragge was truly an extraordinary person, and is probably best known as a surveyor and meterologist.

Thus follows some notes on Wragge, from the late Jack Thwaites, and an excerpt comes courtesy of "The Tasmanian Tramp" No.24 with thanks.

Wragge was born in Worcestershire, England in 1852 and was the son of a solicitor. He was tall, lean and restless, with a mop of red hair. For some years he had training in the law, but his fascination for natural science proved too strong, and he ran away to sea. With his good school grounding, ships' officers gladly taught him astronomy, navigation and meterology.

In 1876 he joined the Surveyor-General's Department in South Australia and surveyed the Flinders Ranges and mallee scrub areas. Returning to England four years later he worked at a meterological station in North Stafford. In 1881 he established a meterological observatory on the top of Ben Nevis (4406 feet high and Britain's tallest mountain.) and climbed the mountain daily for five months to take observations, which was a remarkable feat of endurance. His instrument readings were taken under the most severe winter conditions, often with instruments frozen to their supports. Snowfalls occur at any time of the year on Ben Nevis and at times he was reduced to crawling along because of the wind. During the last month, he nearly lost his life when he tried to climb the mountain during what afterwards, proved to be the greatest gale of the nineteenth century.

On the memorable day, he fought his way back down from the 3000 foot level. The value of his work on Ben Nevis resulted in the establishment of a permanent observatory, which was opened in 1883, and for 21 years, hourly observations were made day and night at this highest point in Britain. At the same time, similar observations were made at Fort William, a sea-level station at the foot of the mountain, which Wragge had also established. The readings here were taken by his wife. The Royal Meterological Society awarded him a gold medal for his work on Ben Nevis.

In 1884 he was back in Adelaide, where he set up a private observatory. Three years later he was appointed Government Meterologist of Queensland and in January 1887 issued the first Australasian weather charts and forecast for each of the Colonies and New Zealand.

In April 1895, a deputation from the The Royal Society of Tasmania, met the Chief Secretary to seek Government support towards putting the Colony's meterological observations "on a more useful sound and scientific basis by the Government", requesting the Queensland Government for Mr Wragge the celebrated meterological observer to visit Tasmania with a view to establishing a meterological station on Mt Wellington, behind Hobart. On the 15th of may 1895 "The Weather Wizard in Excelsis" as "The Mercury" newspaper reported, arrived in Hobart. An observatory hut measuring twelve by eight feet and varying in height from eight to 12 feet was built of wood, floored and lined with a ceiling of the same material, and roofed in corrugated iron. The entire building was surrounded by a wall of rocks, visible to this day. Two months later, Wragge returned to Queensland.

On his appointment as Government Meterologist of Queensland from 1 January 1887, he set about re-organising the whole service. Within three weeks of his arrival, rain fell totalling 18.305 inches, resulting in him receiving the nickname "Inclement" Wragge. He was the first to issue isobaric weather charts in Australia and NZ, and also the first to name cyclones with girls names. Occasionally he would name them after particularly vexatious politicians of the time!

In 1897, Wragge led a party to the summit of Mt Kosciusko to establish a similar observatory on the summit to that of Ben Nevis and Mt Wellington. After an initial tent was destroyed by winds, he built a hut of timber, with an entrance tunnel from above.

A favourite pupil of Wragge, in Brisbane, was Inigo Jones, later to become Australia's most famous long range weather forecaster.

Wragge later missed out on appointment as the Commonwealth Meterologist, and left Australia on a lecture tour. In 1910 he ended up in Auckland where he established a private observatory and laid out a tropical garden of rare plants, which became a show case in New Zealand.

From 1910 until his death in 1922, he devoted a great deal of time to lecturing on all manner of scientific matters in NZ and Australia. Today, his name does not appear on memorials on either Mt Kosciuszko nor Mt Wellington, but a pile of stones sits in each place, for those prepared to look, perhaps a fitting memorial to a man of extrordinary drive and energy.