This trip was planned as a 4-day trip, starting from Eucumbene Dam with the first night at Happy's Hut, the second night camping on or in the vicinity of Far Bald Mountain, taking in the full moon, and the last night at Mackey's Hut. Of course, things never run to plan.

The weekend began on a windy and warm Thursday night sleeping on the veranda of the old primary school (built in 1927) at Rocky Plains. The forecast was for a change on Friday with 5-15cm snow down to 1200m. Looking good!

If we thought it was windy earlier we were mistaken because in the morning it was really blowing. We parked the cars just off the Happy Jacks road (aka Tolbar in parts) about 1 km from the locked gate and off we walked with high expectations of reaching skiable snow somewhere around Adams Hut (about 4-5km away). But it wasn't to be.

So we walked for another 2-3km to just below Bald Hill where the fire-trail has a more southerly aspect and was fortunately holding snow. Here we clicked in and started skiing. By now the weather was starting to take another turn as the forecast change had arrived. The temperature dropped rapidly and there were big fat snowflakes. At this point, because of blisters caused by walking 8km in plastic boots, Marion decided to withdraw and have a quiet four days reading and taking in the forest from a camp beside the cars. But the rest of us pushed on. We weren' 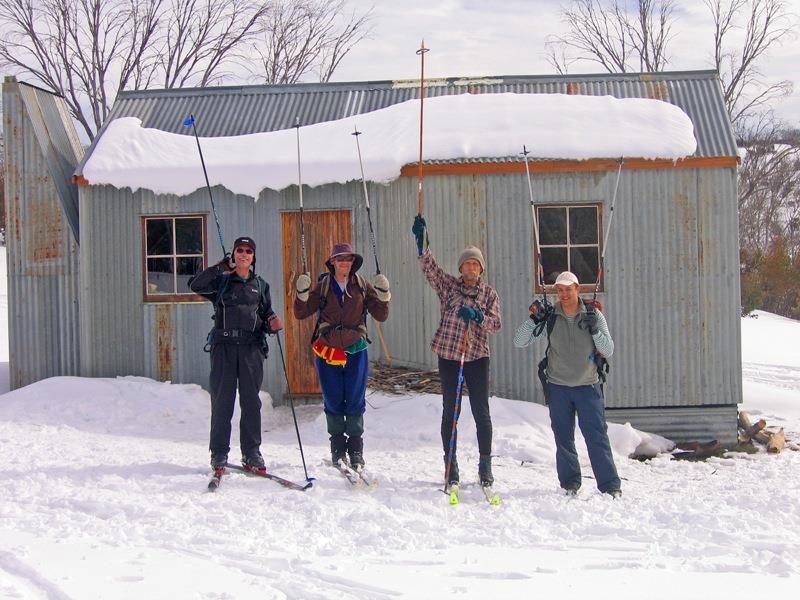