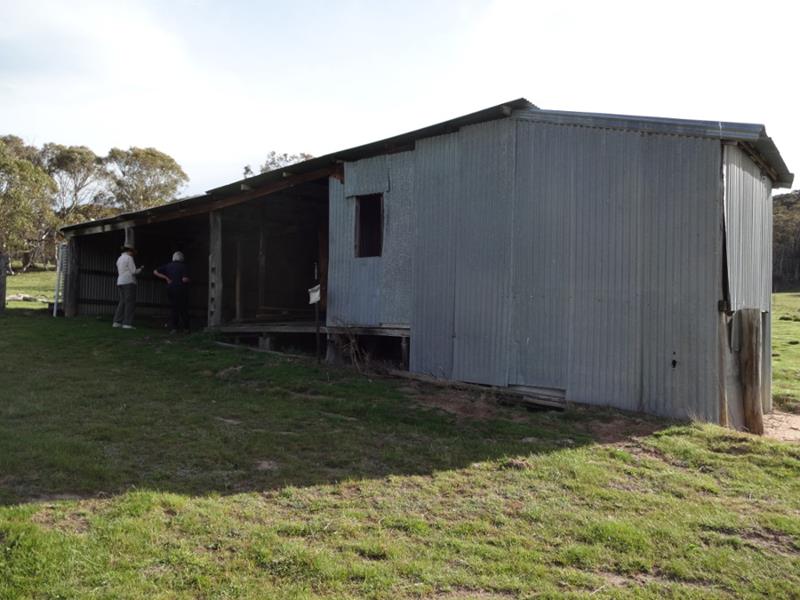 Lutons Crutching Shed is almost on the southern boarder with NSW. It is a good day walk up a grassy valley, with options to climb nearby peaks for the energetic.

Lutons was built for Noel and Greg Luton "Muzzlebrook" at Shannons Flat, to be used for sheep crutching. The builders were Alan Robinson, Noel and Herb Dybal.

Sheep crutching is the removal of excess wool and dags from around the rear of the sheep, to reduce the chance of fly strike, generally undertaken in March or April.

The shed makes a good shelter on a hot or rainy day.

Morris bought Bobeyan Station from Dick Brayshaw (then 52 and living to 54 at Roseview) for Noel and Greg in 1952 and they paid for it over time, farming it until Bobyean was resumed in 1979 by the National Parks (Then the Gudgenby Nature Reserve), an act that they never agreed with.

Their activities included sheep farming, hence the construction of the crutching shed.

The area had originally been slated as an extension to the Gudgenby Pine Forrest reservation.

The roof and walls are of corrugated iron, and part of the floor is timber or timber slats. The shed had at least two major alterations, one in 1984 when the shed was proposed as a Rangers Base and the crutching board was surounded with corrugated iron. A water tank and piping was installed but later stolen.

Numerous sheep yards around the shed were removed by NPWS to make a single horse paddock for their later use.