Located in a very remote part of the Booth Range, Namadgi National Park. Access is usually made from the Boboyan road, on a compass bearing.

Its name stems from the boggy area around, and the general cold and damp of the area during winter.

This hut was built by Ted and Tom Oldfield about 1928, after they had acquired the lease to Block 6 from the De Salis family. George Gould assisted in its construction, and was later to live there almost all year round, a very lonely existence. He looked after fences and kept the dingoes at bay. When mustering time came around, the Oldfields would join him in the task.

The hut collapsed in the late 1980s, but prior to the 2003 fires, the roof was intact and reconstruction could have occured easily. Its fate following the fires is unknown.

The hut was built from timber poles with an iron clad gable roof. 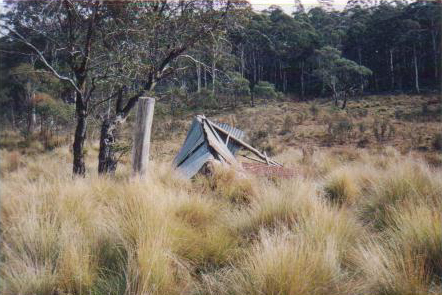