Located near to the summit of Mt Franklin, and just off the road from Piccadilly Circus to Mt Ginini.

This hut was burnt down in the January 2003 bush fires, being the single most significant cultural heritage loss in these fires for Namadgi. It was replaced by a large corrugated iron interpretive shelter.

This hut was specifically built for skiing and was the oldest club-built ski lodge on mainland Australia (older lodges exist in Tasmania).

It was built in the summer of 1937-38 for the Canberra Alpine Club. A large kitchen and living area is downstairs and bunk rooms upstairs. A toilet was built in nearby NSW to satisfy the Cotter catchment regulations, so the hut is very close to the border.

The hut was upgraded in the 1950s, with internal lining of baltic pine. The present kitchen stove came from the Prime Minister's Lodge. The doors to the stove were stolen within days of the lodge being burnt down. Ski runs were also cleared nearby, but have now largely overgrown.

Immediately before the fire, some memorabilia including some old skis etc, were rescued by a thoughtful ACT Parks ranger. 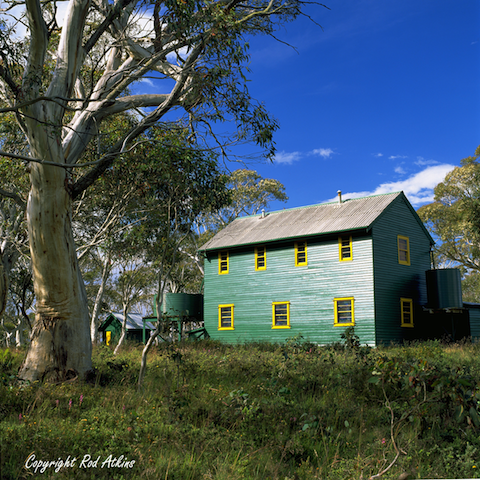