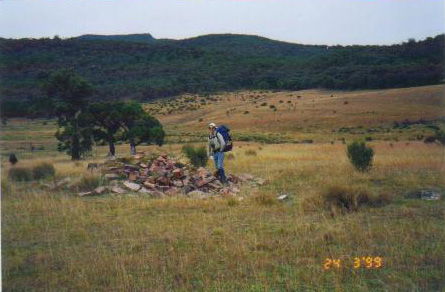 The photo shows the remains of a substantial chimney and the foot plates of a slab hut.

Amanda Carey, Ranger at Namadgi National Park wrote an article in the "News from the Alps" No 23, Autumn 2000 where in the last column, second paragraph this hut is mentioned and how the materials were used from the crashed DC 3, nearby. It was unclear if the aluminium from the crash was used at this hut, or one in Victoria, but the latter is likely. This article was later reprinted in the VicWalk News July 2000.

Only the remains of a substantial brick chimney remains, plus some corrugated iron. Originally a substantial slab home, with the foot plates clearly visible in the photo above. The building probably had a shingle roof originally.