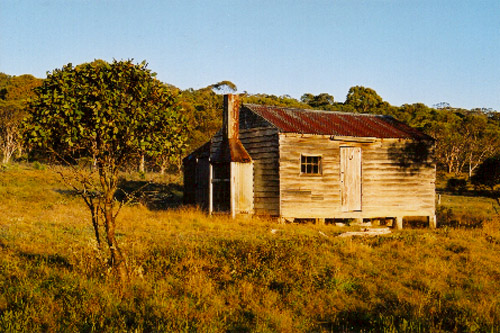 Located at the southern end of Tantangara Plain between Gang Gang Mountain and Bulgar Hill. Access to the hut is via a firetrail from near to Tantangara Dam or from the Snowy Mountains Highway.

It is surprising that this hut is not more popular, especially for families, as access is easy from the sealed highway, about 13kmwest past Adaminaby.

The Boundary Road firetrail leads off to the right in a northerly direction, almost directly opposite the Kosciusko National Park sign, on the highway.

After 2.5 km the track leads through a locked NPWS gate and a few bends along the fence line to a track intersection.

Turn left and walk for about another 2.5km up a wooded hill to an open plain and the hut. It can also be accessed from the north from Circuits (Gulf), Schofields and Brayshaws Huts. Water and firewood are available nearby.

Also known as Gravel or Gavells.

Gavels was built by Dick Schofield and Roy Rawson in 1931, and used for grazing. However, Tom Taylor swears he stayed in it in 1929 and that it was built by James Gavel himself about 1922.

It was owned by James Gavel, who built an earlier hut across the gully. That hut was built of corrugated iron with a flat roof. The last owners were Arthur Yen and Greg Welch. This may have been the hut that Tom referred to.

Gavels is about 6.5m by 4.5m in size. It is built from timber with horizontal weatherboard cladding. The roof is of iron and the floor of timber. The chimney has a brick hearth and is clad in iron at the top. There is no NPWS toilet at this site.