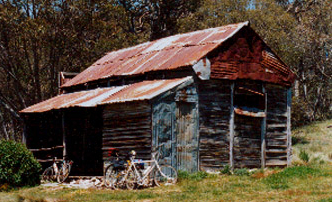 Located along a firetrail, off the Blue Water Holes road.

This homestead was built in 1933 by Bill Harris for himself and new wife, Irene. An older hut existed just behind this one, and was constructed of wattle sticks pushed into the ground. It was later used as a saddle shed. Tom and Molly Taylor were also one-time residents.

This huts was "adopted" by the Canberra Speleological Society (CSS), who maintained for many years, until it was burnt down. Apparently a group of illegal 4WDers were in residence and lit a fire that was too large, resulting in the destruction of the hut in the late 1990s.

Phylis Dowling lived here until she was ten years old, and wrote a long and comprehensive essay in the log book, thankfully preserved. The essay tells us alot about the life, food and requirements of the early 20th century.

The building consisted of 2 rooms and was about 7m by 4.5m. It was built of horizantal slabs with a slab floor. There was a much modified iron flue and flattened kerosene tins were used under the gables.

Later, hessian and canvas, plus newspaper were used as wallpaper to seal out the cold.