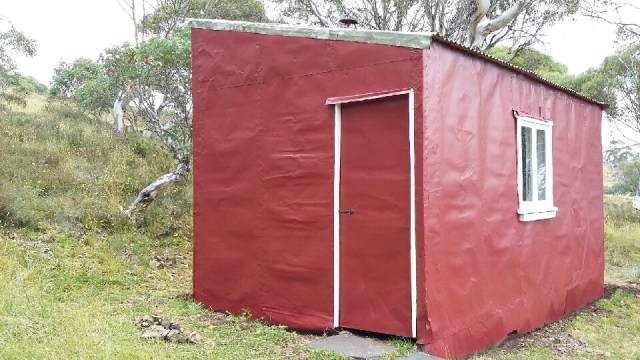 Located about three kilometres due north of Sawyers Hill rest stop. It can be accessed from the north, or from the Rocky Plains fire trail to the south.

There is now a walking track, created by commercial horse tours, all the way to this hut. Start near Sawyers Hill, and drive in the Rocky Plains road. Park immediately behind the horse loading ramp, obviously in front of you as you drive in. Walk up the hill in front, following the power poles. Turn right along the ridge, and where the track branches, take the left route, around the hill (crossing a creek about 50m onwards). After walking around the hill to an obvious saddle, turn right and walk up the valley to the hut. This takes about 75 mins up and 50 minutes back.

It was variously reported as being built in the 1940s by Cec Hetherington or in the 1960's by Harvey Palfrey for skiing and holidays.

Given the architecture, it is more likely to have been built in the 1960s, and two ruins nearby known as Harveys 2 and 3 were built earlier.

This hut has been sometimes called Harveys 4 as a result.

Unfortunately, the hut was damaged in the January 2020 bushfires but is still standing.

This hut is 6m by 3m, and built of iron for both the walls and roof. A stove is also fitted. The floor appears as dirt, but was dry-creted by the Bogong Group in about 1979.