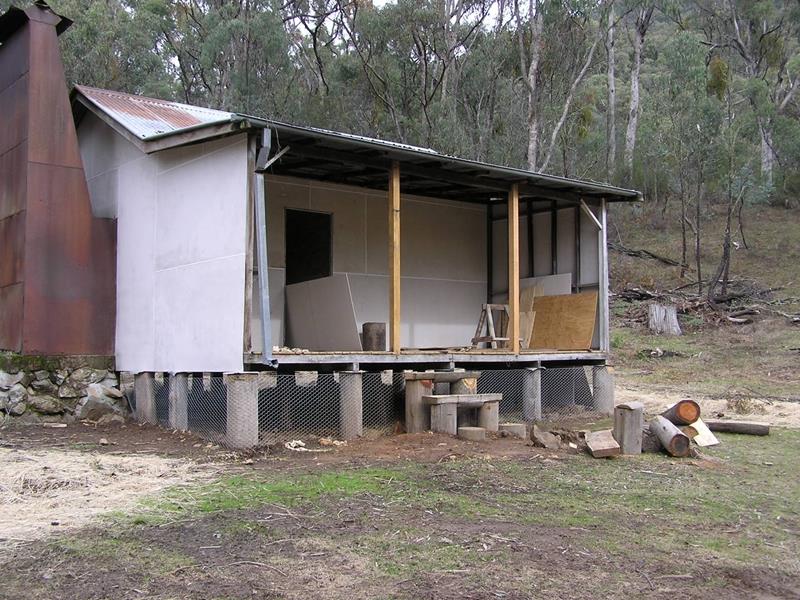 Beside a tributary of the Goobarragandra River, on a spur with a great view.

The hut was built by Bob Lindley on his property for use by Jack Venables as the property caretaker.

In the 1940's Jack Venables had run a successful Eucalyptus distillery at "Stokes Hut" which belonged to his friend George Harris who owned the property. Jack was considered to be a capable bushman and helped many of the surrounding property owners with their stock. The hut was built by the Stokes from local timber - slab sides and floor, together with several out buildings.

When Stokes Hut had deteriorated beyond repair, a new "Venebles Hut" was built further downstream on the site of an old mining hut on the same property. The hut was built in the early 1960s by local fishermen Fred Crane and Eddy Shaw from Tumut. The magnificent steel fireplace and chimney was built by Cowlings Engineering of Tumut and was brought up on a 30 cwt. Willys Jeep truck owned by Jack. Other buildings were erected, a shed for horse and fowl feed-cum-tool shed and a very substantial fowl house and run.

The hut is on an ideal walking path across the northern KNP from Tumut to Peppercorn.

Irwins and Old Stokes ruins are nearby, and Kells is about 7 km up the same valley.

Venables is a home built on strong piers, with hardwood timber framing. The lining and some walls is fibro and the roof is iron. The fireplace flue is a massive piece of engineering, being built from welded steel!

The wall board of this hut was made from asbestos, NPWS removed this in 2005.