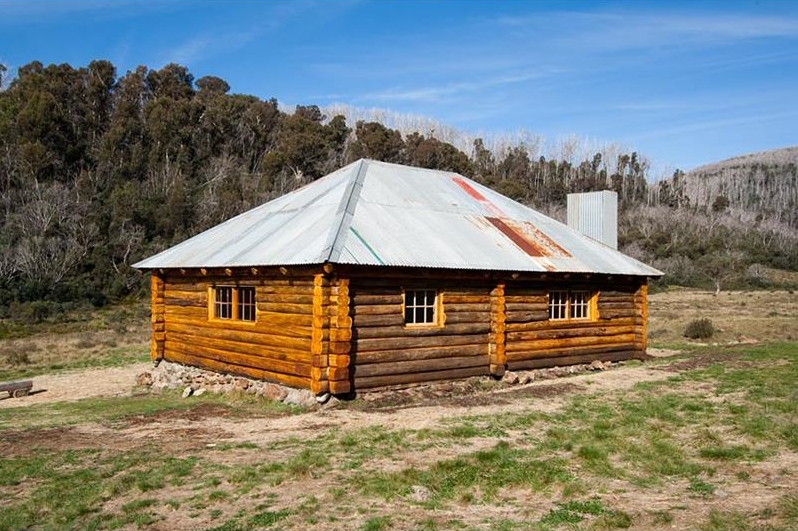 Pretty Plain Hut is located West of Jagungal and to the east of the Dargal Mountains.

It was burnt to the ground by the bushfires in January 2003. Over Christmas 2009 and into 2010, the hut was rebuilt on-site after pre-fabrication.

The hut was built by Captain Chisholm of Khancoban, east of an older hut site, now known as Pretty Plain No.2 The hut was used extensively from 1940 to 1982 for commercial ski tours.

The first vehicles to cross the alps were Willy's Jeeps, driven by Tom and Elyne Mitchell, who passed by the hut on the way from Bradneys Gap to Pretty Plain, Mawsons and then the Chalet. The story of this trip was written up in the log book by Olaf Moon and John Mitchell (Elyne's son) in 1976 and was requoted many times, sometimes with strong criticism! The photograph above was taken that year.

A rotted wall log on the north side was replaced in the 1990's. The Royal Australian Airforce assisted by hauling in a log via helicopter.

Pugilistic Hut stands just to the north, but is now a ruin following the 2003 bushfires.

Pretty Plain was a substantial hut and one of only a few built as a log cabin. The fire place was so large, that you can stand inside it without getting burnt!

The hut was 8m by 6m with three rooms. The floor is made of wood slabs and the roof of corrugated iron. The walls are horizontal interlocking logs, similar to Vickerys. There are three windows.

Pretty Plain is valued by many for its excellent shelter in an otherwise remote area of KNP. Being in a frost hollow, it can be very cold in winter.