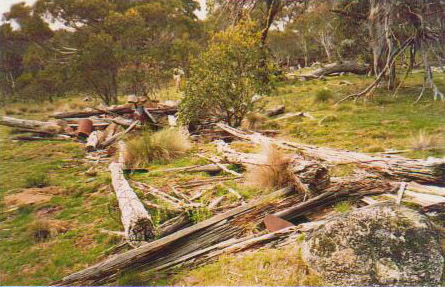 Located near to Daveys Hut

The group of seven Italians arrived from Eden with a sulky and five pounds between them, during the recession, about 1931. They worked hard with the materials they had, and scavenged crockery and carpet from the Kosciusko Hotel tip. They built a vegetable garden and added the fireplace to the hut.

They also built a dam and were successful in finding some gold. Later they went to Newcastle to work in the coal mines, but three were killed there. One returned, Johnny Piazza, who later was confined to the Kosciusko Hotel, during the second world war. He never returned to Snowy Plain. Poles, bark, wire and dog kennels remain.

Refer to Pauline Downings book If I Wake in the Middle of the Night for more details.

Poles with a bark roof and stone chimney.