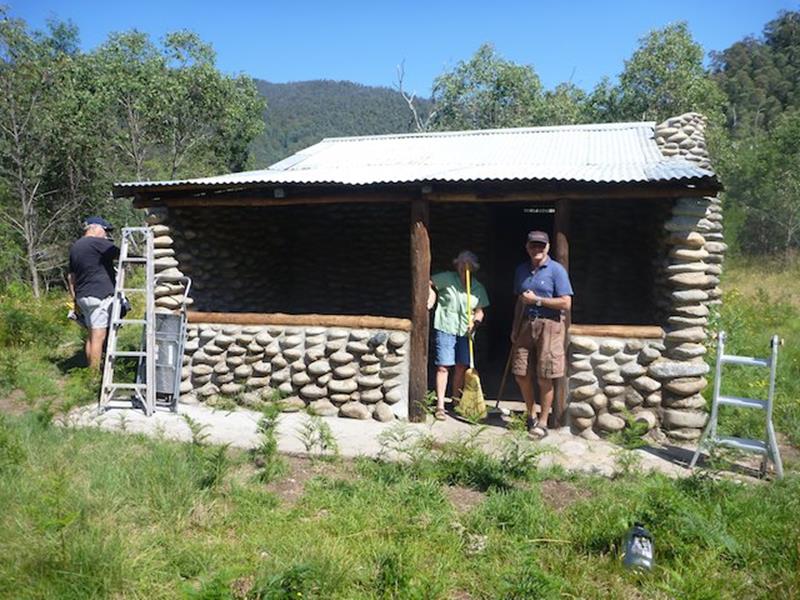 Located in the Geehi Valley flats area, almost on the border with Victoria.

The hut was built in the 1940s for fishing by the Khancoban Waterfall Farm Fly Fishing Club, who used the building regularly until the KNP took over the site in 1969. See the letter from Noel Gough at the end of this article.

There was an earlier hut on this site with very narrow slab walls.

This hut was almost a ruin until recent renovation by the caretakers; Range Rover Club of NSW with help from the Land Rover Owners Club, in partnership with the NPWS of NSW. The hardest part of restoring th hut was that there is no vehicular access. All materials and people had to walk or be carried across the Swampy Plains River.

Doctors is one of the five river stone huts in the Geehi area. It is 3.8m by 4.5m and built of river stones on a concrete slab.

The chimney is also of rocks and cement. There are windows around and a corrugated iron roof, recently restored. There is a toilet adjacent.

"Waterfall" was a large farm near Khancoban which was so named because of the existence of a waterfall on the property. A number of people were regularly accommodated there for the express purpose of trout fishing. Most stayed and fished at Waterfall although there were plenty of fishing spot much closer to Khancoban the idea was somehow promoted that the fishing was better at Geehi. There was probably a commercial side to it also, as most of those that came were fairly well off. Members of the syndicate included ex-military, doctors, the legal fraternity etc.. Sir Thomas Blamey, famous Army General in the second world war was a member as was the doctor in my fathers unit (1st AIF 29th Battalion) Dr Maudsley.

The original hut was not built of stone but of poles-not slabs, vertical posts set in the ground. It was the same site as the present one and would have been built before 1928 possibly by Errol Scammel or his father. Errol was head stockman at Waterfall farm and was first to "Pack" fishermen in to Doctors. He was followed by Keith McLachlan and then Don Benson. The present stone constructed Doctors Hut was built about 1944 by Don Benson from Corryong. (Also builder of Old Geehi Hut and Dr Forbes Hut). The pole hut was not burnt in the 1939 fires as it was still standing in 1942.

Access was not a problem and the people who came in were pretty responsible. Since horses were used it was possible to cross the river just about anywhere. At Doctors it was also possible to leave the main track (Old Alpine Way) directly above the hut and walk straight down the steep south slope of the ridge.

Above edited transcript from records and interview with local farmer and previous owner of Geehi property including Geehi Hut and Keebles Hut, Ken Nankervis..

The Place is held in high regard by past occupants and users.

The Place is one of five huts representative of a building construction type which is unique in the Kosciuszko National Park and possibly within the region. The building is an excellent example of the influence of the local environment in determining the character and method of construction. The Place occupies part of a larger site area which is of outstanding beauty. The immediate site area reflects this condition.