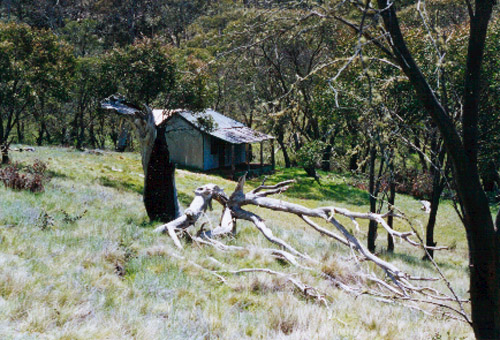 Located four kilometres east of Tantangara Dam. Follow the firetrail towards Pedens Hut, but turn up hill to the left, after crossing the river at the obvious intersection of two firetrails.

There is also an illegal 4WD trail approaching from the rear, accessible from the hill above Tantangara Dam.

This hut was built by jockey Bill Smith, with help from Peter Hadfield, in the 1940s for bookmaker Charles William (Charlie) Townsend and his son Charles John (Jack) Townsend, for summer pasturing of sheep. Charlie was good friends with the Taylor family at nearby Currango. Recollections of the hut by relatives of Jack Townsend can be found at the following links:

Until the late 1990's it was commonly vandalised, but in 1999 it was superbly restored by Clive Richardson and team, including Stewart, Jack, Jim, and Jerry, who removed the dangerous fireplace and much of the fibroboard. They also restored the verandah, making it an excellent hut to visit.

Peter Cochran, past MP for Monaro, is a regular visitor, on horseback. He has the following recollections of the hut:

Townsends was one of my stepfather's?huts. He was Bob Mackay, brother of Dave Mackay (Mackays Hut).

The group responsible for the hut have done a superb job, making it far more comfortable than was my recollection.

Brian Brayshaw and I took the last mob of sheep out of there with Bob some time in 1970/1.  Tom Taylor used to come down the hill behind the hut in his mini moke and count the sheep into the little paddock around the hut to ensure we had the right numbers.

I built a little netting gate alongside a sallee tree which gave access to the creek for water. I notice the fence has been bulldozed up in a heap.

There is also a gambol hanging on the wal that Bob used to hang the sheep he killed for our meat while we camped there. We had a meat safe in the creek line with water running over the top to keep flies away and keep the meat cool.

KHA have done a magnificent job in restoring the huts and maintaining them, so thank you.

The hut is 6m by 3.5m approximately and includes 3 rooms in an irregular shape. The walls are of wood and fibro and the roof of iron. There is a shed at the rear.