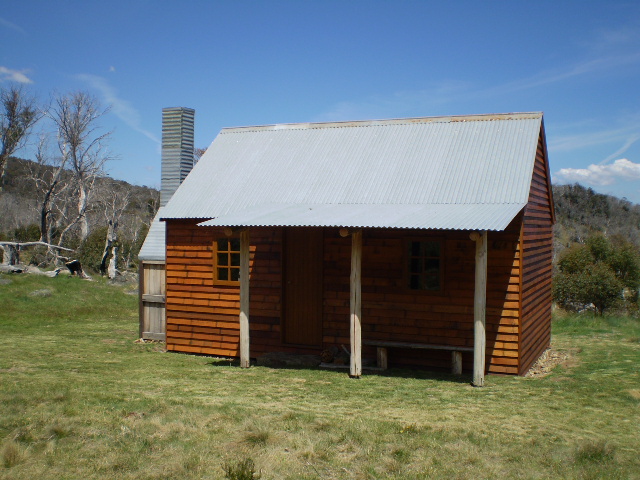 Located on the side of the Snowy Highway between Adaminaby and Tumut. It is readily accessible by car, but the turnoff after Sawyers Hill is not so evident.

The hut was destroyed again in the January 2020 bushfires.

The family name is confirmed, spelt Delany. This hut was rebuilt after it was destroyed in the 2003 fires.

Delanys was built in 1910 by James (Jim) Thomas Delany for grazing his cattle from Buckenderra Station. James Thomas was the son of James Delany of Buckenderry Station (its earlier name). Headstones for the two men are in the Old Adaminaby cemetery and are shown below.

Tom Bolton, the Kiandra mailman, often left his horse here, and went on to Kiandra over snow, using snowshoes.

The hut was burnt down in the January 2003 fires, and the NPWS removed the materials and chimney "for safety reasons". The Hut Conservation Report of May 2005 recommended the hut be re-built under the new Burra Charter guidelines. The hut was successfully rebuilt in 2007, the first of six to be completed.

Unfortunately the hut was destroyed again in the? January 2020 bushfires.

Delanys consists of two rooms. The walls are both weatherboards and slabs, as is the floor (part dirt). The chimney is iron clad slabs.